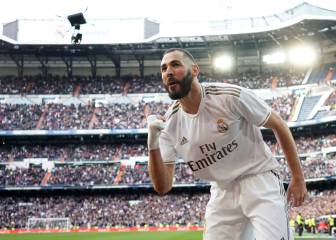 Benzema to lead the line for Real Madrid on his own

French midfielder Paul Pogba has fended off suggestions that he had made an offensive gesture celebrating his country's latest last-gasp win over Albania.

Pogba had been criticised for his performance in France's opening win over Romania. He was a substitute against Albania on Wednesday but came on to provide the assist for Dimitri Payet's stoppage time goal. Pictures of him celebrating showed his arm waving, apparently directed at the press tribune.

Pogba: "No intention to attack anyone"

"I want to say very sincerely, and very strongly, that whatever interpretation one can make about the images, I never had the intention to 'demonstrate' or to attack anyone or to take revenge," Pogba said in a statement to AFP.

"I was so happy with the way it had turned out (the match) and I turned to the stand where my mother and brothers were sitting and I did my usual dance with my arm in the air and with a raised fist. It was nothing more and nothing less," Pogba said.

The Juventus player's agent Mino Raiola also told French media that Pogba was doing a "dance" for the benefit of his friends and family. The 'bras d'honneur' that some alleged Pogba made is a common gesture of defiance in the Latin world.

A photograph of Pogba was splashed across the front page of L'Equipe on Friday with the headline: "On Edge". The paper said Pogba "seems frustrated" by the start to his Euro 2016 campaign.

The debate about his gesture began when a journalist from beIN Sports television tweeted a screen grab of Pogba making the gesture which the journalist judged to be offensive.

The channel's chief editor, Florent Houzot, told L'Equipe newspaper that he had taken the decision not to show the video "which does appear to show an offensive gesture from Paul Pogba".

Some observers interpreted Pogba's gesture as a response to media criticism of two underwhelming performances at Euro 2016 from a player tipped to be one of the tournament's stars.

Support for the Juventus player came from former France international Nicolas Anelka, who is no stranger to controversy himself. "Gentlemen of the press, stop bashing the players," Anelka said in an online video. "We don't care what the truth is in all this. France have won two matches, two victories, six points, that's all, that's what counts isn't it?" the former Arsenal and Real Madrid forward said.

Pogba is Real Madrid's most coveted prize this summer