Deschamps on Zidane: He is managing Real Madrid very well 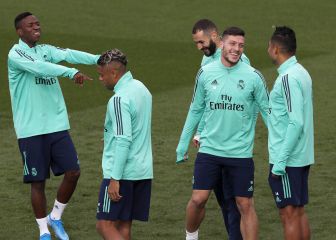 Deschamps on Zidane: He is managing Real Madrid very well

The French manager has been named as the most influential person in French football ahead of Zidane and Antoine Griezmann. France-England live

L'Equipe have named Didier Deschamps as the most influential man in French football ahead of Atletico Madrid striker, Antoine Griezmann and Real Madrid manager Zinedine Zidane.

The French manager had his say about former Juventus and France teammate and spoke about the excellent job that Zidane has done at Real Madrid, "He took over Real Madrid in a difficult situation. He can count on a very, very good team and the results are there to see and he manages the team very well. He could have started his managerial career at another club but Real Madrid is his home. It seems to me that he is really calm and relaxed."

Deschamps says he stills has a very good relationship with Zidane and is very happy for his friend, "when we see each other, it is a pleasure to talk to him. Sincerely, I am happy for him and his success and I know it is reciprocal."

30 most influential footballers in French football

Among the list mentioned as France football's most influential, you have the likes of Paul Pogba, Mario Balotelli, Edinson Cavani and Karim Benzema. Another person, surprisngly, is Mina Raiola - the football agent - at 11th and PSG coach Unai Emery, who has been in charge of PSG for just six months at number 21.

Zidane: I would like Pepe to continue at Real Madrid

James' father: Ancelotti got the best out of my son