A great display by Sevilla and a record for Real Madrid 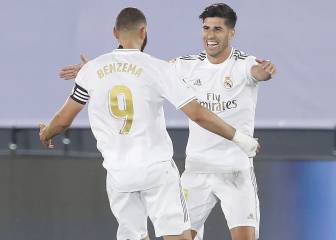 A great display by Sevilla and a record for Real Madrid

Thursday saw a tremendous Copa del Rey game at the Pizjuán, where with ten minutes to go a famous comeback by Sevilla still seemed possible. In the end, however, they were denied even the consolation of having put a stop to Real Madrid's historic unbeaten run. It wasn't a good performance from Real, while it certainly was from the hosts; but in the penalty area, where it really counts, Zinedine Zidane's men were more clinical. Despite Sevilla having them on the ropes for practically the whole night, Real found a way to come away with three goals: the first after a stunning forward burst by Marco Asensio, the second from a penalty converted 'Panenka'-style by Sergio Ramos, and the third, with the clash by now in time added on, following a fantastic, zigzagging run from Karim Benzema.

At the other end, Sevilla scored three, hit the woodwork and forced Kiko Casilla into some fine stops. They had Madrid properly rattled, overwhelming the visitors with a display of verve and quality. They got an early goal and kept at Los Blancos, but reached the break with no further reward; then, they recovered from Asensio's equaliser shortly after half time, retaking the lead and going after more. And when they made it 3-1, it really looked like they might just do it. The Pizjuán was jumping, with the fans roaring their team on and Sevilla threatening from all sides, and with debutant Stevan Jovetic a constant source of danger. Until, that is, Casemiro broke into the box and was halted by a silly foul by Matías Kranevitter. Ramos netted the spot-kick, and boy did it kick off.

He beat David Soria with a dinked effort, which is by no means disrespectful; rather, it's merely a resource available to the penalty-taker. However, he then confronted Sevilla's hardcore fans - who'd been giving him stick - with gestures of defiance, before trying to curry favour with the rest of the stadium with motions of apology. It was all very needless from him. In the main, the Pizjuán turned on him, shouting stuff that just won't do. The atmosphere in the ground changed, and with Sevilla's hopes of a turnaround now scuppered, Real switched their focus to their undefeated streak, finding a leveller at the death. A terrific goal from Benzema to round off a cracking cup tie that we won't forget in a hurry - one that sets up Real's return in LaLiga on Sunday very nicely indeed.