The Croatian defender had been in talks with Robert Fernández over a move to Camp Nou but has decided to stay at the club he has served for 14 years.

“The captain has an announcement to make,” Shakhtar Donetsk said on social media on Saturday as Darijo Srna confirmed that he will remain at the club.

The veteran right back has been at Shakhtar since 2003 and is the club captain but he had been in talks over a move to Barcelona, who are keen to reinforce in that area but have little if anything in the coffers.

Srna would have arrived on a free transfer and had made a verbal agreement with Barça sporting director Robert Fernández over his salary but finally the 33-year-old decided to remain at the Ukrainian side.

“In the end I listened to my heart and I will stay at my club!” Srna, who had been contemplating a move due to the unrest in Ukraine, said.

That leaves Barcelona with the choice of either trying to resurrect Aleix Vidal’s career – the out-of-favour right back had a rare start on Saturday against Las Palmas and scored his first goal for the club – or to comb the market for another player available on a free or for a minimal transfer fee. 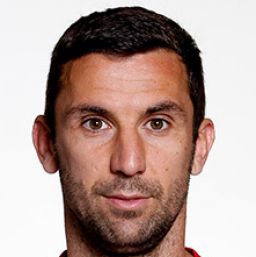 Barcelona: nothing in the January transfer window kitty