After 38 games, Zidane has proved he deserves the title 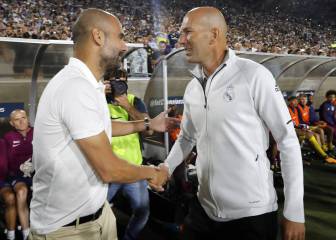 Zidane vs Guardiola: a battle of eulogies

After 38 games, Zidane has proved he deserves the title

Zidane, like an ant, goes about collecting without making noise and reaching figures and goals that were not even within reach of his coveted predecessors who stood on the Bernabeu touchline. Save for Pellegrini (who was killed off by Alcorcón and Lyon despite an exceptional league campaign), neither Mourinho, Miguel Muñoz, Toshack nor Ancelotti were able in their first 38 league games to reach such numbers.

The merit of the Frenchman is consistent with his complicity with a dressing room that has survived an inexplicable plague of injuries that somehow not yet suffered the consequences in terms of results. Aside from that painful loss in the Madrid derby last season at the Bernabeu and the other defeat eight days ago at the Sánchez Pizjuán, there is no other example to find of a game in which Zizou’s Madrid have yielded to a rival. He has come out successfully in two Clasicos at the Camp Nou (1-2 and 1-1). There is also the impressive 0-3 win in the last derby to be played at Calderon, and the 7-1 home stuffing over Celta last year.

To have won 9 points more than Barcelona, 17 more than Atleti and 31 more than Sevilla in his first 38 league games in charge is the stuff of Guinness World Records. I know that all this will not be worth anything if at the end of the campaign the title isn’t his. But for what has been achieved so far, it’s clear that Zidane deserves this league.

Five things we learned from LaLiga this weekend

Real suffer fresh injury blows with Modric and Marcelo out