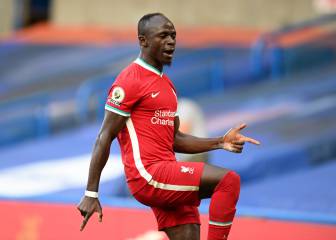 Mané grabs his second thanks to Kepa's mistake

The Real Madrid full-back put through his own net again as Los Blancos bowed out of the Copa del Rey to Celta Vigo on Wednesday night.Copa del Rey 2017 last 16 draw: live online

Defender Danilo made it two own goals in under two weeks in Real Madrid's Copa del Rey quarter-final exit to Celta Vigo on Wednesday evening.

Madrid went into the second leg at Balaídos bidding to overturn a 2-1 deficit from the opener at the Santiago Bernabéu seven days ago.

But Celta were handed a first-half lead when John Guidetti's shot was parried by Kiko Casilla - only to bounce back off the unlucky Brazilian and into the net.

And despite goals from Cristiano Ronaldo and Lucas Vázquez, Daniel Wass's effort in between those two strikes ensured Celta prevailed 4-3 on aggregate.

Also netted OG away to Sevilla 13 days ago

It topped off a fortnight to forget for Danilo, who has endured an unhappy time at the LaLiga giants since joining from FC Porto in a big-money deal in 2015.

Danilo also put through his own net at Sevilla in the last 16 of the Copa earlier in January, misdirecting a header past Casilla from close range.

The much-maligned 25-year-old bore the brunt of the Real fans' displeasure in the first-leg loss to Celta, coming in for whistles when he was susbtituted.

He was also jeered by the Bernabéu crowd three days later when his name was read out among the subs ahead of the side's 2-1 LaLiga win over Málaga.

Celta Vigo knock Real Madrid out of the Copa