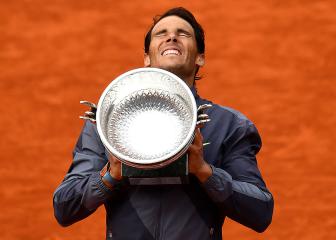 Former world number one Woods revealed on Wednesday that he has penned an agreement to use the California-based company's clubs.

14-time major winner Tiger Woods revealed on Wednesday that he has signed a multi-year deal to use TaylorMade equipment.

The announcement by the former world number one, now 321st in the rankings, comes on the eve of his first US golf event in 17 months.

Made comeback from back surgery in December

Woods made his return from late 2015 back surgery last month at the Hero World Challenge in Albany, Bahamas. While showing flashes of top form, he lacked consistency but appeared physically fine.

Woods will play in the Farmers Insurance Open at Torrey Pines starting Thursday as he begins honing his game ahead of the year's first major event, the Masters in April at Augusta National.

After several months of testing and all brands to choose from, the choice is clearly @TaylorMadeGolf. Proud to join the family! -TW pic.twitter.com/Ist3bA5tqN

His new deal came after Nike, whose equipment Woods had used since joining the US PGA Tour in 1996, decided to drop its golf equipment programme last year. That left Woods, 41, looking for new clubs to launch his comeback.

"After several months of testing and all brands to choose from, the choice is clearly @TaylorMadeGolf. Proud to join the family!" Woods tweeted.

Woods will play the company's metal woods, irons and wedges but the deal does not cover the putter. Woods has a favored Scotty Cameron putter the he used in 13 of his 14 major victories.

Welcome to the faMily, @TigerWoods. #1isNeverDone

The agreement also means Woods will work with TaylorMade's club engineers and have a role in designing and developing a new iron model, according to the company.

Woods: "The choice was easy"

"Throughout my career, I've always been meticulous about my equipment," Woods said. "Over the past few months, I've had clubs from every brand sent to me to test. When it came to making a final decision, the choice was easy - it all came down to performance, which is why I chose TaylorMade."

In December, Woods signed an endorsement deal to play Bridgestone golf balls. Woods is expected to retain Nike branding on his cap since that firm continues to make golf footwear and clothing.

Woods has not played a tournament on US soil since he shared 10th in the Wyndham Championship in August 2015.

Woods has eight triumphs at Torrey Pines, including the 2008 US Open, his most recent major victory.

He will play the first two rounds there this week alongside two other TaylorMade equipment users - world number one Jason Day of Australia and fellow American Dustin Johnson, the third-ranked reigning US Open champion.