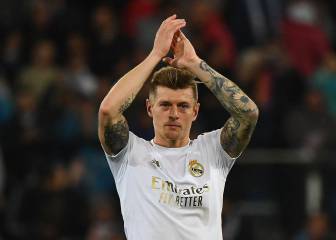 Toni Kroos "not in favour" of player salary cuts

Luis Enrique's position at Camp Nou is under threat following Barcelona's 4-0 drubbing at the hands of Paris Saint-Germain, but ex-Barça coach Guardiola has ruled himself out as a replacement.

Luis Enrique's position at Camp Nou is under threat following Barcelona's 4-0 drubbing at the hands of Paris Saint-Germain in the first leg of their Champions League last-16 tie on Tuesday.

The 46-year-old, who has won two LaLiga titles as well as the Champions League since replacing Gerardo Martino in 2014, is out of contract at the end of the season.

But Guardiola - winner of 14 trophies during his illustrious spell at the Catalan giants - poured cold water over suggestions he could grace Barcelona's touchline again.

"My period there is gone"

"I will never go back to Barcelona to be coach there. My period there is gone," Guardiola said.

Guardiola was speaking ahead of Saturday's FA Cup fifth-round clash at Huddersfield Town.

And as City vie for a spot in the next round, Guardiola called for FA Cup replays to be scrapped, instead suggesting the Copa del Rey model, which is played over two legs except for the final.

"In Spain, we play two games. I prefer that situation," he said. "Maybe for the amount of games played, extra-time and penalties would be good.

"But OK, I'm not here to decide the rules of how we play the competition, I'm here to play the competition in the way that the chairmen and the important people decide. I prefer the quality over the quantity. Not only here in England, all around the world. It's a big mistake, so many games."