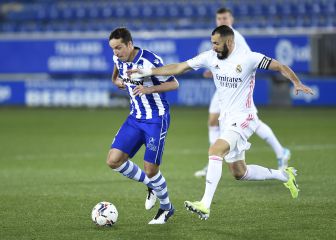 Samuel Eto'o's former agent José Jesús Mesas looked back at the Cameroonian striker's time at Lega ahead of the Pepineros' visit to Camp Nou.

Samuel Eto'o was, is, and will always be a legend at Barcelona - and he is at Leganés too. The Cameroonian spent his first few years in Spain with the Pepineros. Agend just 16, and recently signed by Real Madrid, the young forward became close to team captain José Jesús Mesas, who years later would become his representative in Spain. On the eve of Leganés' trip to Camp Nou,  AS caught up with Mesas to take a nostalgic look back at Eto'o's beginnings at the Butarque .

Barça versus Leganés - what does that conjure up for you?

Even just a few years ago, a game like this would have been unthinkable. But eher we are. It's a moment to enjoy, to savour. For Samuel's generation, destiny owed us a game like this. We came close to promotion. Leganés enjoyed four or five very successful years. The old ground helped to forge a union between the club and the fans - there was always a great atmosphere, great football and we did come close to being promoted although that was never a real objective.

Could Leganés pull a surprise at Camp Nou tomorrow?

This is football - of course they could, but then we are also talking about Barça... one of the best teams in the world. I've certainly seen stranger things happen. We have to go there with all of the hope in the world - and fight. It might work out well… or we could get thrashed.

Have you chatted to Eto'o about this game?

No, I haven't spoken to him for a few weeks. I was going to give him a call this week to have a chat. He is the most successful player in Leganés' history without a shadow of a doubt. And for Barça he marked a golden era at the club.

If you were to call him, what would you say?

More than anything, just to say hello and hope he's well. As I say, it's been a while since we last spoke. Which team would he be supporting tomorrow? Look… Samuel is someone who knows a lot about these things. His great virtue was that he always learned the best from the people around him. I am sure that he would give a very diplomatic answer as not to upset either club.

What was Eto'o like when he joined Leganés aged just 16?

My own kids are now 15 and 13. Back then I looked at him as an equal, but thinking about it now… he was the same age as my daughter! So he was still just a kid really, but one with a lot of life already built up behind him, he came through some difficult times…

For him to become the legend he is today took a lot of work and help - you were one of the people who helped him in that process...

We became friends right from the start. I was the team captain but at the same time, I was very close to him. I remember the day when he arrived at Leganés; Paco de Gracia, who was then working for Real Madrid and who knew me, said: “Mesas, take good care of this kid. Guide him in the right direction”. Samuel lived at the players' residence at Real Madrid. He liked to learn. He was a good listener. He soaked up everything so he could learn.

Di you ever imagine the player he would go on to become?

Everyone could see his potential. But to be honest he exceeded all of our expectations. He wasn't even a striker when he first came here - he was more of a winger. He had incredible pace but he continually matured as a player until he became the best number 9 in the world. During those years at Barça there was no one like him - not just for the goals he scored but for his work rate, his sacrifice for the team. That was what I liked most about him.

Tell us about the 'belt' incident?

Back then we were paid bonuses for winning in the same week. One day, after a game, they gave us 100,000 pesetas. The next day, after being handed our bonus, Samuel comes into the dressing room and says: “Do you like it capi?”. I said yes, it's very nice. When I asked him how much he had paid for it, he said that he'd spent all of his bonus on it. The following week we won again and again were given a bonus - he spends it on another belt, in a different colour. “Capi, what do you think?”, he asks me. “But you showed me that belt last week”, I say to him. “No, no. This one's a different colour”... that was Eto’o...