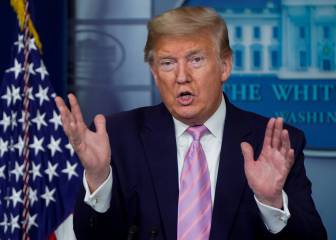 Coronavirus live: "There will be a lot of death" in US, Trump says

Golden State Warriors man Durant has been ruled out for an indefinite period after suffering injury against Washington Wizards on Tuesday. Warriors-Cavs Game 5 Live

Golden State Warriors star Kevin Durant faces an indefinite injury lay-off after spraining a knee ligament but could return before the end of the regular season, the NBA team said on Wednesday.

Injured in clash with Pachulia

Durant hobbled off the court during the Warriors' defeat to the Washington Wizards on Tuesday after a collision with team-mate Zaza Pachulia.

"It has been determined that Durant suffered a grade 2 medial collateral ligament sprain and a tibial bone bruise," the Warriors said following a scan.

To be re-assessed in a month

"He will be out of action indefinitely and will be re-evaluated in four weeks. There is no timetable for his return but it has not been ruled out that he could play again before the end of the regular season."

Durant left Tuesday's game at the Verizon Center early in the first period after Pachulia fell backwards onto his legs after a foul by Washington's Martin Gortat.

Durant, 28, was left in obvious discomfort following the collision and cut a dejected figure as he limped away towards the locker room.

"I'm always concerned about any injury, because you never know how bad it's going to be, so we'll just wait and see and keep our fingers crossed," Golden State coach Steve Kerr said afterwards.

The Warriors, who have already booked their place in the play-offs at the top of the Western Conference with a 50-10 record, eventually lost the game 112-108.

It was an unhappy homecoming of sorts for Durant, the 2014 NBA MVP who grew up near Washington in Maryland and who had been courted by the Wizards during his free agency last year before choosing to join the Warriors.

That snub clearly still rankled with some Washington fans on Tuesday, who subjected Durant to boos during the introduction and whenever he touched the ball during his fleeting appearance.