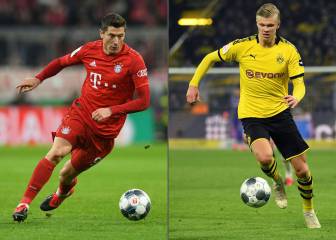 Lewandowski vs Haaland: Der Klassiker battle of old vs new

The French player passed away this morning aged 85. He arrived at the Bernabeu in 1956 and won three European Cups with Real Madrid.

French football player Raymond Kopa, who played with Real Madrid from 1956-1959 passed away this morning in Angers (France). The 85 year old was hospitalised as of last Sunday and his son in law Willam Boucher earlier told reporters: "Raymond died this morning at 08:15 as a result of his condition deteriorating".

Kopa moved to Real Madrid ahead of the 1956-1957 season from French side Stade Reims and would go on to claim three European Cups whilst with the Santiago Bernabéu outfit. Along with Alfredo Di Stéfano, Gento, Puskas and Rial the quintet became known as the "Magic Five" and they helped Madrid to secure league titles in 1957 and 1958.

Real Madrid paid their own tribute to the player last August as Stade Reims were invited to play at the Trofeo Santiago Bernabéu with "Little Napoleon" as he was fondly known, the guest of honour and along with former Madrid legend, Paco Gento, both players kicked the game off .

Kopa helped the French national team to a third place at the 1958 World Cup and was named player of the tournament. The same year the attacker was awarded with the Ballon d'Or being one of just four French players to boast the award along with Michel Platini, Zinedine Zidane and Jean-Pierre Papin.