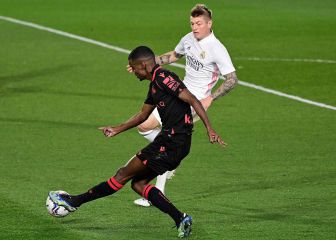 Ter Stegen was up from the back and the clocking was running down when Sergi Roberto met Neymar's clipped through ball and guided the ball past an onrushing Trapp.

Pandemonium ensued, as Roberto was buried beneath a mountain of celebrating Barcelona players and staff on the Camp Nou turf.

Sergi Roberto sealed Barcelona's place in the annuls of European football, as they became the first club to overturn a four goal deficit from the first leg of a Champions League tie.

Roberto replaced Rafinha on 79 minutes, and at that point, it looked almost certain that Barça would be crashing out of the Champions League.

Roberto's presence on the pitch coincided with a remarkable swing in fortunes for the Catalan club. Neymar bent a shot in to the top corner on 88 minutes to set PSG's nerves jangling.

Neymar, that man again, calmly slotted a penalty on 90 minutes as the Fourth Official held up his board to show that five more minutes would be played. In the last of those five minutes, the stage was set for Roberto to write his name in to history; the protagonist of a truly iconic night in the history of FC Barcelona, and European football.

Read the match report and see how the story unfolded