Iñaki Williams: “Cristiano has so many qualities - and they all go into the mix”

Iñaki Williams: “Cristiano has so many qualities - and they all go into the mix”

The Athletic forward is relishing tomorrow's visit from Real Madrid. He had complimentary words for Cristiano and Gareth Bale as he previewed the game.

Athletic's Iñaki Williams says he will be training his sights on Real Madrid when Los Blancos pay their annual visit to Bilbao tomorrow. The forward also added that he was deeply affected by what happened to team mate Alejandro Remiro in Wednesday's training session, and says he is very relieved that the player didn't suffer any serious injury and is now safely on the mend.

The team has entered into a very positive dynamic. Real Madrid are playing to win the league, but we need points too, to put ourselves into the European places.

Do you study Cristiano Ronaldo's game at all?

He's absolutely lethal, he has so many qualities - and all of them go into the mix: he's ambitious, hard-working... He deserves all of the credit he has received for the career he's had.

Do you think there are similarities between your game and Bale's?

He's amazing in the air - the way he heads the ball is spectacular and he has a really powerful left foot shot. Both of them have amazing pace and they're very powerful.

Yes - because the whole world is watching!

You have enjoyed a remarkable development in Lezama; it's all happening so quickly...

Yes. But no one gifts you anything in life; what I have done and who I am I have earned through hard work and effort. I've worked hard for it. I'm very proud of everything I have achieved but there's still a long way to go.

You come from a very humble family...

Suffering makes you one kind of person or another. My family is very hard-working, they are battlers and those are the values they have instilled in me.

Was winning the Spanish Supercup the best thing that has ever happened to you?

Making the first team, signing a professional contract - thanks to which we had some kind of financial stability and meant that my Dad was able to come over from London... And also realizing a dream of being able to lift a trophy here at Athletic against the best Barça side in history... of course was amazing.

Is your younger brother Nico an even better footballer than you?

For his age, yes, he is better than I was. I really hope we can coincide together in the first team at some point in the future.

Some critics claim that you do a lot of running on the pitch but not much else.

It's very easy to say I only run. I do a lot of things - some well, others not so well. It doesn't mean that before I was a good player, nor that now I am a bad player.

They are always on my case, they push me hard. They are experienced players and know what this is all about.

Do you see yourself as Aduriz's replacement?

He is our reference in attack, I hope he continues for many more years and that those of us who are coming up through the ranks can match his great figures.

Do you think you are worth 50 million euros?

I set that price based on what I did last season. I've always been very up-front, I'm happy and so is my family; I have the best coach, the best fans and the best team mates. 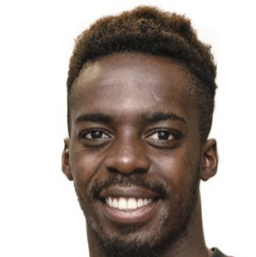