Costa: "When Atléti needed to wait for me, they didn't" 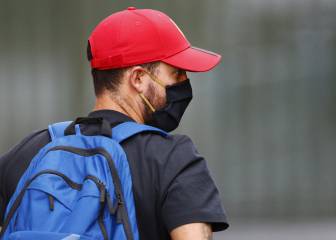 Costa: "When Atléti needed to wait for me, they didn't"

Chelsea striker Diego Costa spoke frankly on El Larguero about his attempts to return to Atlético last summer, his relationship with Conte, and China.

In an interview with El Larguero, Diego Costa discussed his failed attempt to return to Atlético Madrid last summer, his relationship with Antonio Conte, and a potential move to China.

On Atlético: 'I did all I could to return'

‘My relationship with Conte didn’t begin particularly well. When he arrived, I told him I wanted to leave for Atlético. I tried [to make the move happen], but when Atlético needed to wait for me, they didn’t. That’s the truth’, said the Brazil-born Spain striker on Tuesday evening.

A prickly figure on the pitch, Costa added that ‘if Atlético wanted me, they needed to wait for me, not get scared because they only had one month. At that point, I did all I could to return.’ It appears doubtful that Costa will continue to force the issue on a move to the Calderón: ‘now, I’m not going to fight to return.’

'If they get to the final this year, they'll win'

That said, Costa is optimistic of Cholo Simeone and co.'s chances in European competition.

'I think they’ve done well this season. They haven’t been quite as strong in the league, but in the Champions League, let’s wait and see. If they get to the final this year, they’ll win. Regardless of whom they may face. I have a special affection for Atlético, I had the best period of my career there, even though I was injured for key games at the end of the season. If I had been fit… who knows? I still watch Atlético matches when I can.'

‘My relationship with Conte remains damaged’, admitted Costa. Yet he was keen to differentiate between his relationship with Chelsea Football Club, and the Stamford Bridge faithful: ‘I have no qualms with the Chelsea fans. They love me, almost more than the Atléti fans.’

Despite his desire to clear desire to leave Chelsea last summer, Costa does not accept criticism of his commitment.

‘It is one thing when people tell me that I’m not playing well, or that things aren’t going well for me. But nobody can question my commitment. I have sacrificed a lot to be here, I have played a lot, I have created problems for my family… my commitment is not in doubt.’

Looking ahead, Costa did not rule out a move to the rapidly-expanding Chinese Super League, but remained coy.

‘Anything can happen in life, and I don’t want to shut the door on anything… right now I’m at Chelsea, I still have two years remaining on my contract, and I intent to stay for those two years.’ Yet he reiterated, ‘I don’t rule anything out’.

The striker is currently part of Julen Lopetegui's Spain squad, and could feature against Israel in Gijón on Friday.