Vitolo: "Any player would love to play for Barcelona" 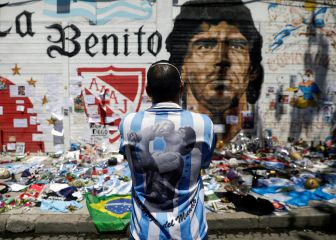 Vitolo: "Any player would love to play for Barcelona"

The Sevilla player chatted about his future on La COPE's 'El Partidazo' programme: “You never know what's around the corner, but I'm relaxed”.

Barcelona's interest in Sevilla midfielder Vitolo is hardly news, but last night the player spoke about the possibility of joining the Catalans to La COPE's El Partidazo programme: “It's true that there have been quite a lot of rumours but you never know what will happen. I'm relaxed, I'm in a team where I am liked by my team mates and the people in Seville love me alot”.

Would you be keen to join Barça? “Yes, as I have said many times already, Barcelona is one of the best teams in the world and any player would love to play there. I'm quite happy where I am and I am relaxed; we'll see what happens”.

On target again for the national team: “It's true that every time I am called up I am lucky enough to score, and it seesm to happen more with Spain than with Sevilla. I am happy to help the national team to continue winning which is the most important”.

Silva almost stole your goal from you, but he decided to let the ball go over the line... “I would have killed him if he had done that! We're mates and I'm happy that things are going well for me and for him”.

September's qualifier against Italy will be decisive: “In theory, Italy are going to be our most complicated opponents now. It's going to be a great game, but it's a long way off yet. First we have a game against France, even if it's only a friendly. With the national team you always have to give your best; France are a great side and if we are not at the top of our game they will give us a difficult time. We have to go all out in every game”.

Sevilla, after being knocked out of Europe by Leicester: “We haven't been getting good results lately but I have full faith in the team and we need to make sure we win our next game against Sporting. If we can do that, I'm sure the outlook will be more positive”.

Vitolo reveals why he turned down Atletico Madrid

Vitolo: "I'll play in goal if that's where Lopetegui wants me"