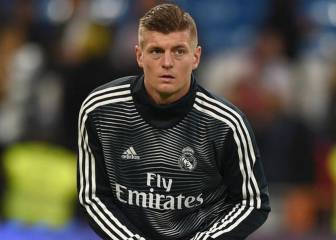 "There is something going on with Kroos"

VfL Wolfsburg want to keep Borja Mayoral for a second season, but a surprised Real are expected to rebuff the Bundesliga club's advances.

VfL Wolfsburg are keen to extend Borja Mayoral's loan stint in Germany, but Real Madrid look set to scupper their bid to keep the youngster for a second year.

Representatives of Wolfsburg were in Madrid last week to meet Los Blancos over Mayoral, who joined the Bundesliga side on a season-long deal in summer 2016.

Real are said to have been surprised by the request to retain the striker, using the talks to make plain their unhappiness over his limited game time with Die Wölfe.

Since moving to the Volkswagen Arena last July, the 19-year-old has played just 392 minutes, despite scoring in two of the four starts he's been handed.

Real are thought to have initially been understanding over Mayoral's restricted opportunities, putting the situation down to the need for him to adapt to Germany.

As the season has worn on, however, Los Merengues have grown steadily more disconcerted by the attacking prospect's peripheral first-team role.

No decision until after Euro Under-21 Championship

The player, meanwhile, told Diario AS in an exclusive interview in December that he is not panicking and will continue to fight for his place.

Despite his lack of playing time this term, Mayoral has established himself as Spain Under-21s' first-choice centre-forward under Albert Celades and, barring any surprises, will lead the line for La Rojita at Euro 2017 this summer.

His parent club are not expected to make any decisions over his future until after the conclusion of the tournament in Poland.

Mayoral: "I've been studying Benzema since I was 15"