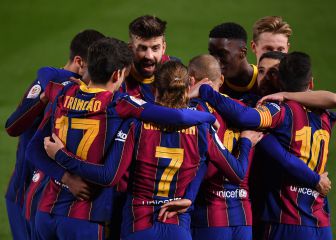 Barça head to Copa final after late overturn against Sevilla

The France defender limped off early in the match with what appeared to be a flare up of his hamstring injury after a month and a half on the sidelines.

Raphaël Varane limped off the Bernabéu turf after just 10 minutes of his comeback match on Sunday with what appeared to be a recurrence of the hamstring injury that had kept him on the sidelines for a month and a half.

Carvajal a caution away from missing the derby

Dani Carvajal came on to replace the France defender after Zidane had initially handed his overworked right back a rest after he played for Spain during the international break. The Real manager was also keen to ensure that Carvajal did not pick up a yellow card that would have ruled him out of the game against Leganés, which the defender will be keen to feature in: Carvajal was born in the southern Madrid suburb. However, the issue now is that Carvajal is on four yellow cards and risks missing the derby against Atlético if he is cautioned in Butarque, which could mean another start for Danilo next Wednesday.

Varane has missed seven games for Real Madrid this season due to muscle injuries: Sporting, Villarreal, Las Palmas, Napoli, Eibar, Betis and Athletic. He will undergo a scan later on Sunday to determine the extent of his latest problem but could be a doubt for the matches against Atlético and Bayern Munich in the Champions League.

Varane ruled out for four to six weeks with hamstring injury