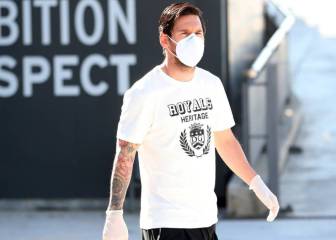 The final game to be played at Atlético's stadium will take place on 28 May - a charity match between past and present players and a combined world XI.

Atlético de Madrid, in conjunction with Scholas Ocurrentes presented plans for what will be the final game to be played at the Vicente Calderón before the Rojiblancos move to their new premises.The Rojiblancos will pay tribute to their 50-year-old ground with a charity match on 28 May under the slogan: "Legendary - a Commitment to Peace" - a game in which an Atlético side featuring past and present stars will take on a combined world XI. Proceeds from the event will go to Scholas Ocurrentes' programmes to help underprivileged children.

Final game at the Calderón given Papal blessing

Schollas president José María del Corral added that the game has been endorsed and supported by Pope Francis. “On Friday, the Pope will give his blessing to this game. We give thanks to football - this sport and education should go hand in hand”.

Attending today's presentation were many former Atleti players as well as member of the current side such as Koke, Gabi, Juanfran and past players like Adelardo, Miguel Ángel Ruiz, Abel, Solozábal, Clemente, Luiz Pereira, Caminero, Manolo, Vizcaíno, Aguilera, Antonio López and Perea.

Adelardo, who captained the side in the 1970s, recalled his best memory of the Calderón: “I have so many great memories of this stadium, but perhaps the greatest of all was lifting the  Intercontinental Copa. At that points, the club really deserved to win a trophy of that prestige”.

Ruiz, who wore the skipper's armband in the 80s will never forget the run-ins with Barcelona which have become one of the biggest games in the calendar: “I'll never forget the 3-1 win over Barcelona and I will always associate the ground with Luis Aragonés who was such a big figure at this club”. Current captain Gabi concurred: “I'm proud to be sat here among some of the club's most legendary players; what has had most impact on me personally si the message that has been passed down, from fathers to sons, over the years here at Atleti and continues to this day”.

Atlético and 'Speedy Filipe' gear up for the derby