Luis Enrique: "I might watch the derby… if I'm not having a siesta" 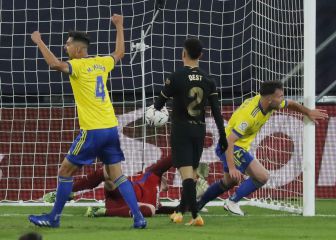 Negredo puts Cádiz back in front

Luis Enrique: "I might watch the derby… if I'm not having a siesta"

Barça's coach gave an ironic reply when asked about tomorrow's meeting between Real Madrid and Atlético: "Any tips for Simeone? It's not my job to give advice".

Luis Enrique faced the media on Friday to preview tomorrow's trip to Málaga but was inevitably asked about the match that will be played four hours before that in the capital between Real Madrid and Atlético, and gave a sardonic reply: "What time is it being played? Well if I'm not having an afternoon nap, I might watch it..."

The Míchel effect at Málaga

How do you rate Málaga since Míchel has taken over? “They're a side who have changed their coach and that is significant. He hasn't had very long to work with the squad he's got but with the result they got mid-week in Gijón brought them three much-needed points. Málaga have always given us problems - they have quality and it's going to be a good test for us to see what possibilities we have in la Liga”.

The title race in play at the Bernabéu: “The title race for us will be in Málaga and that's all. Because if we don't take three points from Málaga, the situation's going to get complicated. The only thing we can say for certain is that if we don't win in Málaga and our rivals do, we'll be putting ourselves in difficulties. Obviously matches between direct rivals can be decisive but right now, la Liga depends on Málaga for us”.

Is the Málaga game a good dress rehearsal for the Juventus match: “No. We are talking about two completely different competitions. All of us can think that shortly we'll have the Champions League tie to play, but we know the risks if we lose concentration in la Liga”.

Different tactical systems: “The system isn't what matters; it's the players who make a system work. Changing a system doesn't change the chemistry of a team”.

Luis Enrique on the final weeks of the league

Do you think Barça can win these last eight remaining games? “Yes, but there are other teams who can win all of their games too. All of the teams who are near the top can. If you start talking about statistics then it is difficult to win every match but our objective is to win the games which remain even though that will be very difficult. It's better just to focus on the only game which could have an influence which is our next one, against Málaga and confront it with 100% motivation”.

Will you be watching the derby? “What time does it kick off?

Atlético's chances: “The same as Madrid's. It's a derby - they're different games, special games, which mean a lot. Maybe the home factor counts but in recent seasons that hasn't really come into it - we've seen home wins and away wins”.

Any tips for Simeone? “It's not for me to give advice”.

Juventus: “I'd tell Allegri to rest Higuaín, Cuadrado, Dybala etcetera against us so that they will be fresh for Serie A”.

Barça keep up pressure on with easy win over Sevilla

Abidal unsure on Unzue: "I'm not sure he has enough knowledge"