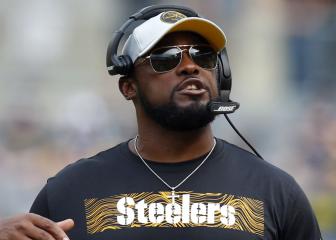 James Harden scored 37 points as the Houston Rockets routed Russell Westbrook and the Oklahoma City Thunder 118-87 in the opening game of their NBA playoff series on Sunday.

James Harden scored 37 points as the Houston Rockets routed Russell Westbrook and the Oklahoma City Thunder 118-87 in the opening game of their NBA playoff series on Sunday.

'Tonight was a good game but it is just one win,' Harden said. 'We have to be ready to go for Wednesday.'

Westbrook tallied 22 points, 11 rebounds and seven assists but he also made nine turnovers and missed 17 of 23 shot attempts. Harden and Westbrook are considered the frontrunners in the league MVP race. But Westbrook's individual brilliance doesn't always translate into Thunder victories.

The Rockets held Westbrook to just seven points in the second half as they stretched a five point halftime lead to 33 points. As good as Harden was Sunday he also got plenty of help from a strong supporting cast. Patrick Beverley scored a postseason career high 21 points while Nene chipped in 15 points off the bench for Houston. Beverley also shut down Westbrook defensively when it mattered the most.

'When you are dealing with a team like that it is pick your poison,' said Thunder coach Billy Donovan.

NBA: Iker Casillas has a dig at Gerard Piqué over his NBA knowledge