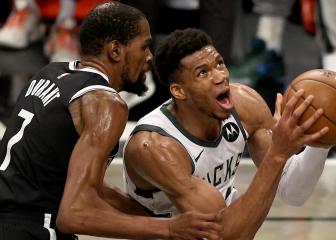 Russell Westbrook's latest triple-double came with plenty of help from his teammates, and translated to a 115-113 NBA playoff victory for the Oklahoma City Thunder on Friday. Final NBA: Cavs vs Warriors, juego 2

Russell Westbrook produced yet another triple-double and the Oklahoma City Thunder held on for a crucial 115-113 victory over the Houston Rockets in the NBA playoffs on Friday.

With the win on their home court, the Thunder avoided falling into an 0-3 hole in their best-of-seven Western Conference first-round series, narrowing the deficit to 2-1.

Eastern Conference top seeds Boston also clawed back from an 0-2 deficit, beating the Bulls in Chicago 104-87 after dropping the first two games of their series at home.

"That was our only goal for this game was (to) just get the win no matter what for us to have a chance to make it a series," the Celtics' Jae Crowder said.

Celtics taking it one game at a time

"You go down 0-3 and it's really, really tough for you to fight back, but we just wanted to take it one game at a time and get this game and give ourselves a chance."

Dwyane Wade scored 18 points and Jimmy Butler chipped in 14 for Chicago, but the Bulls offense looked stagnant without point guard Rajon Rondo, who is sidelined indefinitely with a broken thumb.

Butler connected on just seven of his 21 shots from the floor and didn't get to the free throw line.

The Bulls didn't have a single assist in the third quarter as they struggled to get their offense going.

"We're not going to put this all on us missing Rondo because if that's the case we might as well not show up anymore because it looks like we're going to be missing him for awhile," Wade said. "We have to figure out a way to be better."

In Oklahoma City, Westbrook became the first player to notch back-to-back triple-doubles in the same playoff series since Jason Kidd in the 2002 Eastern Conference finals.

But even his 32 points, 11 assists and 13 rebounds were barely enough against the Rockets, who had a chance to win at the buzzer only for James Harden to miss a three-point attempt.

Westbrook's second missed free throw in the waning seconds had kept the door open for the Rockets, who had tied it at 111-111 with 52 seconds to play on a Harden three-pointer.

Westbrook responded with his first three-point attempt of the game. It didn't fall, but teammate Steven Adams was there for the tip-in that put the Thunder back in front.

Clippers take the lead in the series

In Salt Lake City, Los Angeles point guard Chris Paul scored 24 of his 34 points in the second half as the Clippers rallied for a 111-106 victory over the Utah Jazz.

The Clippers took a 2-1 lead in the series, despite losing Blake Griffin to a toe injury late in the second quarter.

Griffin scored 11 points and pulled down six rebounds before departing, and Clippers coach Doc Rivers said immediately after the game that the extent of Griffin's injury was unclear.

"We should have more news tomorrow," Rivers said.

DeAndre Jordan scored 17 points and grabbed 13 rebounds and Luc Mbah a Moute added 15 points for the Clippers, who withstood a career-high 40 points from Utah's Gordon Hayward.

The Clippers erased a double-digit deficit by the end of the third quarter. When they took the lead with 4:01 to play they were in front for the first time since the first quarter.

"We just hung in there," Rivers said of the key to the turnaround. "I thought the second half even though Blake wasn't there we just kept playing and we just kept hanging in there."