Bayern Munich out of Champions League and cup in a week 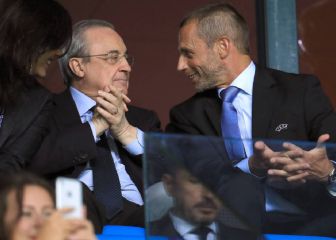 Bayern Munich out of Champions League and cup in a week

Borussia Dortmund won 2-3 in Munich to eliminate Bundesliga title favourites Bayern from the German cup in the semi-final. They will now play Eintracht Frankfurt in the final.

Carlo Ancelotti insisted he is focussed on wrapping up the Bundesliga before assessing how successful his first season at Bayern Munich has been following a shock German Cup semi-final defeat.

April has been little short of a disaster for Ancelotti and Bayern.

The German champions threw away a 2-1 lead at the Allianz Arena on Wednesday before going down 3-2 to Borussia Dortmund. That came a week after the Bavarian giants were dumped out of the Champions League at the quarter-final stage by Real Madrid.

Bayern remain on course for a fifth straight Bundesliga, though, and Ancelotti refused to try summing up his first campaign in Munich with four league matches still to play and five more points needed to wrap up the title.

'It's too soon for that,' said Ancelotti. 'We have to now make things clear in the championship (German league) as quickly as possible.'

Javi Martinez and Mats Hummels had netted first-half goals for Bayern to cancel out Marco Reus's early strike for Dortmund. But Borussia roared back in the second-half, brushing off their 4-1 league hammering by Bayern just three weeks ago.

Pierre-Emerick Aubameyang scored his 35th goal of the season, set up by Ousmane Dembele, before the French wunderkind drilled home Dortmund's winner 16 minutes from time.

'The disappointment is huge,' admitted captain Philipp Lahm, who will retire when the season ends. We wanted to reach the final, when we have a... lead, it should be hard to win against us,' he insisted.

Bayern let the game slip out of their grasp despite 24 shots on goal - more than twice as many as Dortmund - and nearly 70 percent possession.

'When you look at the many chances we had to reach the final, you can sum things up that we negligently let things slip,' said Hummels.

Bayern could win the Bundesliga as early as this weekend, if they beat relegation-threatened Wolfsburg away on Saturday and second-placed RB Leipzig fail to defeat second from bottom Ingolstadt at home.

'If you become a (league) champion, it is never a bad season,' added Lahm. 'Despite all this I will try to enjoy the last few weeks.'

However, there is no dressing up the fact it has been a bitterly unsatisfactory month for Ancelotti. Bayern were 13 points clear in the Bundesliga on April 1 and still on course to repeat their 2013 treble of domestic double and Champions League. Exiting both the Champions League and cup before the final amounts to a poor season by Bayern's lofty standards.

'This is not the right time to talk about the future, but now we have to lick our wounds in peace and that hurts,' said Bayern chairman Karl-Heinz Rummenigge.

Ancelotti's job is not yet under threat, but his first season compares unfavourably with predecessor Pep Guardiola. The current Manchester City boss reached the Champions League semi-finals and landed the double in his first season, repeating the feat in his last campaign a year ago too.

Bayern appeal to government over gripe with Spanish police