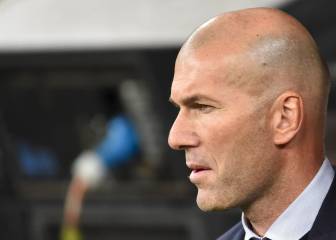 Atlético Madrid coach Diego Simeone assured that he will continue at the club at least until the end of the Audi Cup, a friendly competition held in Germany.

Atlético Madrid boss Diego Simeone shed light on his situation at the club in a virtual press-conference ahead of the Audi Cup.

Atleti crashed out of the Champions League at the semi-final stage, despite beating Real Madrid at the Calderón this week.

“I’m here and I will be here for the Audi Cup”, said ‘El Cholo’ during the conference, which featured the managers of Atlético, Liverpool, and Bayern, the three clubs that will contest for the pre-season trophy.

Simeone, Klopp, and Ancelotti were all present, if not physically. Ancelotti was the only one who was actually in the room, with Simeone and Klopp joining from Spain and England respectively.

Bayern broadcast the conference through Facebook Live, and the three coaches expressed what it means to them to compete in the Audi Cup.

“We’re happy to compete in this tournament,” said Simeone, “and to be invited along with Bayern and Liverpool, who we will surely meet in the Champions League next season.”

“Taking part is another step forward as the club continues to grow, and playing in this tournament before the start of the season will give us a good indication of our level.”

70,000 tuned in live to watch the conference, which lasted for about 30 minutes.

Benzema photographer: "I could feel the storm coming on"