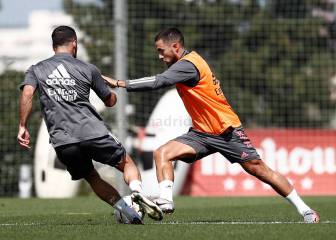 The soon-to-be Real Madrid footballer's girlfriend, Adriana Pozueco, appears not to be a big admirer of the left-back's expected future club.Champions League draw 2018

Atlético Madrid youth product Theo Hernández, who has taken LaLiga by storm on loan at Alavés this season, looks set to be a Real Madrid player next term.

This week it emerged that the French left-back has completed a medical with Real ahead of a summer move to the Santiago Bernabéu on a five-year deal.

However, Hernández's girlfriend may well have mixed feelings about his switch to Atleti's city rivals, who knocked Los Rojiblancos out of Europe on Wednesday.

Adriana Pozueco is a lifelong fan of Atlético and has taken to Instagram on several occasions to publish photos of herself in the club's colours.

Next to an image in which she appears in an Atleti kit as a toddler, Pozueco included the now-deleted comment: "My mum made me pretty, smart and anti-Madridista".