Zidane leaves James and Lucas Vázquez out of final squad 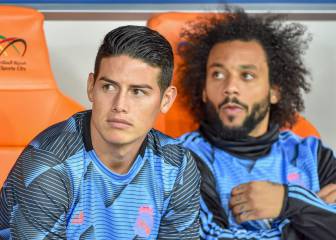 Zidane leaves James and Lucas Vázquez out of final squad

Yáñez, Pepe, Coentrao, Mariano, and Enzo Zidane also fail to make the bench for the Champions League final against Juventus in Cardiff.

James Rodríguez and Lucas Vázquez have failed to earn a place on the bench for Real Madrid, as Zinedine Zidane’s side take on Juventus in the Champions League final in Cardiff.

Follow every last bit of the action here at AS English, with Robbie providing blow-by-blow commentary.

James and Vázquez out of favour

James’ absence ostensibly confirms that he will leave the Bernabéu this summer, an outcome that already appeared highly likely. It is the first time that the Colombian playmaker has been left out of the match-day squad for a big game, despite being fit to play.

Lucas Vázquez, for his part, had slipped below Marco Asensio in the pecking order in recent weeks.

The Real Madrid bench will be kept warm by Casilla, Nacho, Danilo, Kovacic, Asensio, Bale, and Morata. As such, Zidane has every position covered.

Ronaldo: "I will never be a striker"