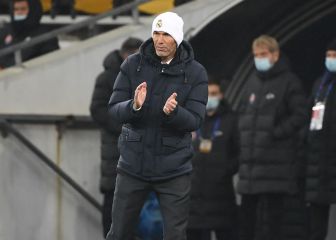 The Real Betis player spoke about the Spain Under 21 side, his friendship with Marco Asensio, Saúl, and the rumoured interest from Real Madrid.

Saúl Ñíguez was the protagonist as Spain defeated Italy in the semi-final of the Under 21 European Championship, but Dani Ceballos played the main supporting role. The Real Betis midfielder spoke to AS about the U21 Euros, his friendship with Marco Asensio, and interest from Real Madrid.

How were you feeling after your exhibition against Italy?

I’ve received quite a few congratulatory messages from my family and friends. For me personally, it was one of the best performances of my career.

Are you in a good place physically?

I’d be lying if I said yes, right now I’m carrying knocks all over the place [laughs]. But we know how important the match is, and before a final you don’t feel the pain.

What does it mean to pull on the Spain shirt?

Wearing the Spain shirt is the most beautiful feeling you can have as a footballer. On a personal level, listening to your country’s anthem on the pitch is just the best.

This Spain Under 21 side is more direct than others. Have you reinvented your style?

This teams doesn’t identify itself solely with one style of play. We also feel comfortable playing on the counter-attack, yet when we’ve had the ball, we’ve played some of the most eye-catching football in the tournament.

Barely nine months ago, you were watching Betis matches from the stands. Back then, could you have imagined what has happened since?

That was a tough time. I was in the stands, I wasn’t in the coach’s plans… But thanks to God there was a change, Victor came in, and it’s him that I need to thank for what he’s done for me, and for getting the best performances out of me.

With which other player in the team do you feel most comfortable?

With Asensio. We’re friends and room-mates. We get on really well both on and off the pitch.

You two are referred to as brothers within the group…

Yeah, we’re always talking. For the last three years, every time the national team meets we’re together 24/7, and when that happens you have a special relationship.

Who wins at ping-pong?

[Laughs] I’ve got to admit that he’s better than me. He’s been playing in Mallorca for a while.

You and Saúl also complement each other perfectly. How do you feel with him?

Saúl is the soul of this team. He has opened the scoring in matches at key moments, and it’s a big advantage to have him in the team.

How do you feel in light of rumoured interest from Real Madrid?

I feel relaxed about that. My aim is to beat Germany. When the tournament is over, I’ll sit down with my agents and we’ll look at the offers on the table. Right now, my future is with Betis. I have three years left on my contract, and I’m relaxed.

But you’re flattered by the interest?

At the end of the day, if the big clubs are interested in you, it’s because you’re doing well. It’s really nice to be talked about like that.

Had you dreamed of one day seeing your name linked with Real Madrid?

From when you’re young, everybody wants to see that. But I’m relaxed and trying to get on with things as normal. I speak with my family and friends to isolate myself a little, and build up strength ahead of the final.

Real Betis president: Real Madrid have not contact us over Ceballos