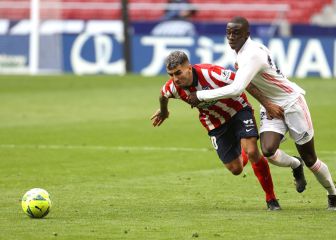 The Rojiblancos technical department prefer not to loan the player, who will be able to train under Diego Simeone's guidance until he can be registeredChampions League semi-final draw: live online

Atlético Madrid are close to re-signing Diego Costa, on the express wishes of Diego Simeone, for the 2017-18 season; although the Chelsea centre-forward won't be able to play until January. In the back rooms at Atlético, officials are keeping tight-lipped on transfer affairs (Sevilla's Vitolo is another player who El Cholo has requested); but directors are working hard to satisfy the coach's needs. Atlético now have to reach middle ground with Chelsea, as in Diego Costa's mind, he's already half the way back to being a rojiblanco again.

Atlético, who cannot register new players until 2 January 2018 because of the imposed transfer ban, won't send Diego Costa on loan to another club; one option was to loan the player for six months to a club in China or Brazil but that plan has been discarded. Atlético feel the best solution would be for Costa to train with the first team squad for four months until he is eligible to play. By January 2018, with the transfer ban lifted, Costa will be physically in peak condition and hunger to return to competition. Atleti's technical staff feel that a player like Diego Costa is the perfect compliment for the likes of Griezmann, Torres and Gameiro.

Meanwhile, the operation to bring Alexandre Lacazette to the club appears to have hit the rocks. Lyon president Jean-Michel Aulas has admitted that Arsenal could be the player's next destination with the Gunners prepared to lay out 50 million euros.

In France, reports claim Atlético are locked in a bidding war with PSG for Monaco midfielder Fabinho. According to L’Équipe, Atleti have offered 35 million euros for the Brazilian player. Monaco, should they resign themselves to losing the 23-year-old, would rather sell to a club outside of France instead of a direct competitor. L'Équipe believe Fabinho would remain at Monaco until 1 January when he would complete his move to Atleti

Saúl renews with Atlético to 2026