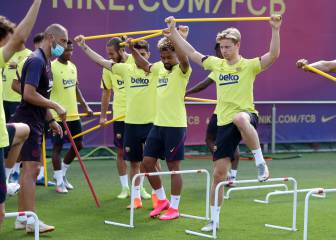 Barça spokesman Josep Vives has played down talk of the Brazil star leaving the Camp Nou, with PSG tipped to sign the 25-year-old.

Barcelona spokesman Josep Vives has moved to calm fans' concerns over the future of striker Neymar, in the wake of widespread reports linking the supposedly unsettled Brazilian with a move to Ligue 1 club Paris Saint-Germain.

Vives: "We wouldn't even consider an offer for Neymar"

"We're absolutely calm," said Vives on Monday. "We want Neymar to stay and remain as happy here as he is now, and continue to play and grow at Barça. He's a fantastic player, one of the world's best; we're all delighted with him, as is he with us.

"We want him to remain part of the fantastic team that we have, in which he is a key figure," he went on. "We wouldn't even consider an offer for him, however big it were. We're not even contemplating his sale. Neymar is part of an attacking trio that has no equal in world football."

Valverde: "Having Messi by my side is a relief"