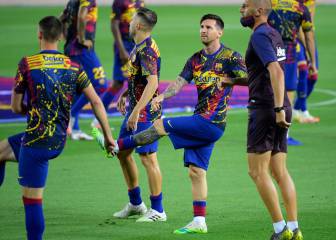 Team news in at Zorrilla

The Barcelona defender confirmed that the social media post was not official and although he hopes that the Brazilian stays, only he can decide for himself.

Barcelona's Spanish defender Gerard Piqué, along with Argentinian teammate, Javier Mascherano attended the press conference on Tuesday evening as part of the pre-season tour commitments. During the questioning, Piqué admitted that the social media message he posted on Sunday saying that Neymar was staying at Barcelona was just his personal feeling, not an official statement.

With much speculation over the last couple of weeks surrounding the potential move of Barcelona star Neymar to PSG in Ligue 1, it came as a huge relief to many fans of the Catalan club when Piqué, often seen as a club spokeman, sent out a message to the world. It was simple, a photo of the two players with the message, "He's staying".

By the reaction to the news by many, that was that. The story could be put to bed and focus instead could turn to new manager Valverde's project building, not void filling. But in the press conference last night he clarified that it was just his emotions, nothing official, that were behind the post, something that had been suggested in the hours after the message:

"It was nothing official, it was a personal opinion. It doesn't depend on me, only Neymar can say what will happen. I hope he stays."

Pique went on to confirm the fact that Neymar had options 'on the table' (something that even after all the speculation was being questioned) but that if he wants to be the best he is better placed to do that in Spain's Liga than in Ligue 1.