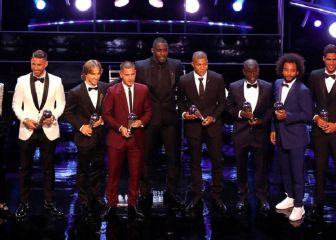 “I swapped shirts with him after the game and hopefully it'll be the last one he's worn for Barcelona”, the Real Madrid captain said after Clásico loss. Sevilla-Leganés: Copa del Rey

Sergio Ramos spoke to reporters in the mixed zone after Real Madrid were beaten by Barcelona in the Clásico in Miami.

Match: “We’d have preferred the result to be different. As I said in the press conference, whenever we play a Clásico the motivation is huge. We are still in pre-season and getting ready for the season. After the opening 10 minutes we felt we were better but they won the game in the end. This will help us to prepare better and now we have to move on. They came out very strong in the opening 20 minutes and they set our alarm bells ringing. We set out to press them high up the pitch and to win the ball in their half. We managed to pull level before the break but in the second half they scored from a set piece. There are conclusions for us to look at.”

Neymar’s last game for Barcelona? “I don’t know, everybody is free to decide their own future. I hope so, it’ll be one less problem for us.”

Did you say goodbye at the end of the game? “I swapped shirts with him and hopefully it’ll turn out to be the last one he wears at Barcelona.”

Return from injury: “I wanted to start getting the feeling back after only a few days of being able to train. I was looking forward to getting back on the pitch to get some confidence. Now we have titles to play for and we have to go into those games in the best form possible.”