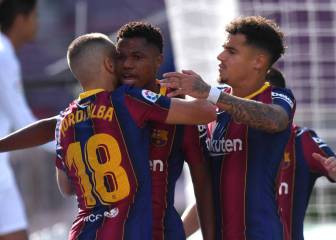 Casemiro booked for a challenge on Messi

After a morning of jokes and hoaxes over the China trip, the Brazilian returned back to Spain and was back to his usual tricks with the press. He's due to train tomorrow.

Neymar arrived back in Barcelona this evening at 20.55 hours on a flight from Dubai after a very long day full of false information and wind-ups published on the player's Instagram account.

Neymar anounced that he was flying out to Brazil, then that he was going to Paris - all very amusing but in the end, he embarked on Emirates Flight 187 from Dubai to Barcelona, posing for photos with fellow passengers with total normality in the luggage reclaim area. An airport worker opened a side door to allow the player to avoid the 50 or so journalists and camnera crews waiting for him in the arrivals zone. Only local broadcaster TV3 had access to the luggage area and were able to film Neymar as he made his way out of the airprort.

At 9:30am tomorrow in Sant Joan Despí, Ernesto Valverde and the rest of the Barça squad will be waiting for Neymar who is due to take part in the day's training session. There is little more that Barcelona can do while they await a statement from PSG, who sooner or later will stump up Neymar's buy-out, either in negotiations or by going directly to LaLiga.

In the meantime, confusion still clouds the issue. Nasser Al-Khelaifi added more puzzlement to the mix by stating: “Neymar is a Barcelona player and we respect players' contracts” - words from Friday last week which only surfaced today, which highlight PSG's intention to negociate with Barcelona who have already dug in their heels. Maybe too late...