Real Madrid confident of the 'yes' from Mbappé 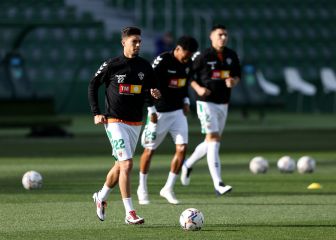 Real Madrid confident of the 'yes' from Mbappé

Mbappé and his father told Monaco that the striker wants to play at Real Madrid and he has reiterated his desire to leave recently with los Blancos in pole positionChampions League Final: Real Madrid - Liverpool

Real Madrid are fully aware that Kylian Mbappé wants to wear white next season. The footballer and his father, Wilfried Mbappé, communicated as much to the club back in June. The player's intention to leave Monaco this summer became public knowledge recently and revived interest at the Santiago Bernabeu. That does not mean, however, that Real Madrid are in any hurry and will wait until the last day of the market if they have to. They did it with Gareth Bale, Luka Modric and Cristiano Ronaldo and Zidane himself says, "Up until August 31st, anything can happen."

The lack of goals in preseason has been a cause for concern at the club and the absence of Ronaldo along with the tame efforts of Benzema and Bale in front of goals haven't helped. The squad arrived home from the United States on Thursday and Zidane will be relying on the Portuguese to reignite his attack in the next couple of weeks. Mbappé would certainly help too, however, and his potential arrival has been given a boost with the departure of Alvaro Morata to Chelsea.

Zizou is a huge fan of Mbappé and the manager has never hidden that. He has taken advantage whenever given the chance to praise the player, "He's very good, no? He is a talent and only 18 years old. He has personality and he's very good, a very good player as he has shown all year but he's not my player." Meanwhile, Madrid are hoping to draw on the emotional factor to close the deal. He admires Zidane, has visited Valdebebas at 14 years of age and he also has four compatriots in the dressing room including Karim Benzema, Raphael Varane, Theo Hernandez and the manager."

Barcelona and Manchester City are also trying to coax the teenager to move. Pep Guardiola told him that he would become the cornerstone of City's new project while Barcelona have the funds now that Neymar's €222 million transfer to PSG has been confirmed.