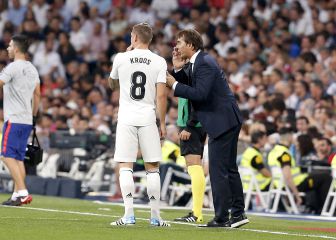 Toni Kroos: "I would have kept Lopetegui"

The Slovenian keeper's minimum release clause at Atlético stands at 100 million euros, but PSG are to ramp up their interest in Simeone's number one.Nigeria B - Atlético Madrid: friendly

PSG are preparing to flex their financial muscles in the transfer market again as the Ligue 1 giants attempt to lure Atlético Madrid keeper Jan Oblak to the Parc des Princes.

The French club’s owner, Nasser Al-Khelaifi, has arranged a meeting with the Slovenia international’s agent in Paris on Saturday, French media reported, to lay out PSG’s offer for the Atlético number one. However, the deal will not be an easy one to complete with Diego Simeone in no mood to sell his first-choice keeper on the eve of the Liga season and with the club prevented from signing any players in this transfer window due to a Fifa sanction.

Atlético are attempting to tie Oblak down to a new deal at the club but thus far nothing concrete has materialized on that front with the club having already improved deals for Antoine Griezmann, Koke and Saúl. If PSG come in with a firm offer Atlético’s stance will be the same as it has been when rival clubs have come calling for their star players: no negotiation. Therefore if PSG want to activate Oblak’s minimum release clause – something they have recent experience of doing - Al-Khalaifi will have to rummage around for 100 million euros.

Oblak extended his contract at Atlético to 2021 in February 2016, in a season when he won his first Zamora trophy as LaLiga’s least-breached keeper. The Slovenian earned his second last season and is regarded as one of the best in his position in the world, which has piqued the interest of some of Europe’s biggest clubs. But with Atlético standing firm it will take a world record fee for a goalkeeper to dislodge Oblak from the sticks as the club prepare to inaugurate their new stadium for the 2017-18 season.

Atlético turn down PSG offer of €75 million for Jan Oblak