Welcome to our live online coverage of the final day of Spain's 2017 summer transfer window. In England, France, Italy and Germany, the window slammed shut on Thursday, but here in LaLiga clubs still have until 23:59 CEST to add to their squads, while in Portugal there's ages left: the market is open until September 22!

Join us for live transfer news throughout the day as we keep you up-to-date on all the movements happening. Rumours, talks, expected deals, completed signings, contract extensions - it'll all be covered right here.

Andreas Pereira tp Velancia is a done deal.
Johannes Geis moves to Sevilla from Schalke 04
So looking like no Di Maria to Barça ....
More action up in Galicia following the signing of Lucas Pérez yesterday.
Las Palmas announced the signing of Loic Remy on a two-year deal. He had rescinded his contract at Chelsea.
Munir joins Alavés on a season-long loan from Barcelona.

Lucas Pérez sealed a season-long loan move back to Deportivo from Arsenal on Thursday, and it's fair to say the fans in A Coruña were happy to see the onion-bag botherer return to northern Spain:
Athletic Club have confirmed a deal with Eibar to sign right-back Ander Capa on 1 July 2018, in exchange for a three-million-euro fee:
Following Thursday's confirmation that Kylian Mbappé is joining Paris Saint-Germain, Alfredo Relaño discusses the move in his editorial:
Barcelona are to give it "one final push" in their chase of Liverpool's Philippe Coutinho, reports AS's Santi Giménez:
Ukrainian forward Roman Zozulya, who was at the centre of a farcical loan-move-that-wasn't to Rayo Vallecano in January, has parted company with Real Betis:
Espanyol academy graduate Sergi Darder has  returned to the LaLiga club on loan from Ligue 1 outfit Lyon:
Real Madrid youth product Álvaro Medrán has joined Alavés on a season-long loan from Valencia:

It's "Coutinho day", trumpets Sport, with the Catalan press still optimistic of the Brazilian being prised away from Liverpool. 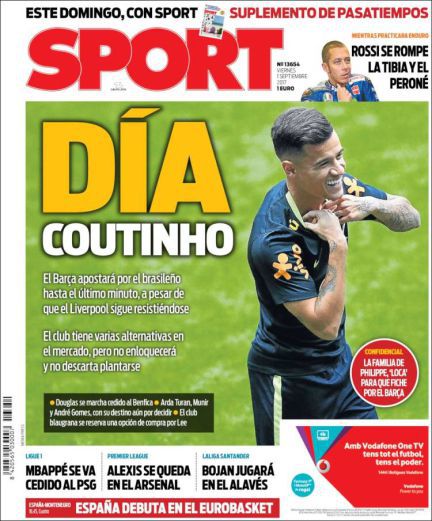 It's fair to say there has been much mirth in the UK's tabloid press at Arsenal's failure to get Thomas Lemar in and Man City target Alexis Sánchez out before the deadline last night: 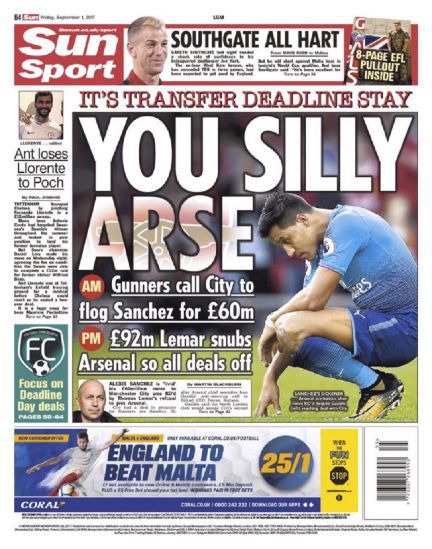 While you were (probably) sleeping, Chelsea got this one over the line:
And the headlines were also dominated by Alexis Sánchez's failed move to Manchester City...
Chief among yesterday's deadline day news elsewhere in Europe was...