Zidane confirms Kroos and Vallejo out of Sociedad game 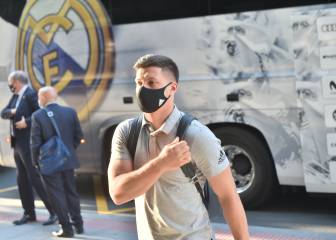 Zidane confirms Kroos and Vallejo out of Sociedad game

"We're not taking any risks". This was the message from the Real Madrid manager who will also be without Kovacic and Benzema, injured, and Cristiano and Marcelo, banned.

Real Madrid ended their final training session ahead of their trip to San Sebastián with both Toni Kroos and Jesús Vallejo absent. The German, who was a substitute in the Champions League midweek, didn't go through the workout with his teammates and manager Zinedine Zidane has confirmed that neither player will take part in Sunday's match against Real Sociedad.

Zidane without Cristiano and Benzema attack

Zidane, had 19 players at his disposal for the second session following the victory over Apoel on Wednesday. Karim Benzema and Mateo Kovacic, both suffering from injuries, continued their recovery separate from the main squad. These absentees add to the problems for the Spanish champions who are also without Cristiano Ronaldo and Marcelo thanks to resent disciplinary sanctions.

Marco Asensio, in better news for Los Blancos, should be back in the starting line up in Anoeta and much will be resting on the shoulders of the young man with so many others missing.