Valverde: "If Dembélé hadn't tried a backheel he'd be available" 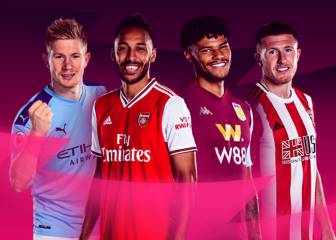 Valverde: "If Dembélé hadn't tried a backheel he'd be available"

The Barcelona boss suggested his player was at fault for picking up serious injury and denied the length of the Coliseum grass was a factor.

Speaking to the press ahead of Barcelona’s match against Eibar, Ernesto Valverde discussed Ousmane Dembélé’s injury and the side’s options as to who will deputize for the France international.

Asked about the manner in which Dembélé picked up his injury, Valverde suggested inexperience - and his attempted backheel on the run – were contributing factors, with the suspicion that the forward felt something in his leg during the warm-up.

Valverde: "Dembélé is a young player and he'll recover"

“We can’t dwell on it,” Valverde said. “When someone is stretching they always touch their leg. He has never had a problem like that and he doesn’t have the experience to detect something like that. When a player is going at that speed and does a backheel it can happen, it’s a possibility. It happened to me. Maybe in a more experienced player it wouldn’t have. It’s happened to us all at some point and we have to view it with a long-term perspective. He’s a young player and he’ll recover.”

Pushed on whether the expectation on Dembélé and his lack of a full pre-season had a part to play, Valverde responded: “I don’t know. What is certain is that if he hadn’t tried the backheel it wouldn’t have happened. We’re not going to round in circles over it and we’re not going to get down about it, the way we’re looking at it is that he is one day closer to recovering.”

Valverde also answered a question about the length of the grass in the Coliseum and whether it was in breach of Liga regulations: “There are rules in place. It doesn’t matter now. The game is over. We don’t have much to add.”

"We'll keep Barcelona B in mind"

With Dembélé out for three to four months, Valverde will have to find a replacement from inside the squad to fill the Frenchman’s place alongside Leo Messi and Luis Suárez and discussed the alternatives to Gerard Deulofeu, who came on for Dembélé in Getafe: “There are various players. We also have Aleix [Vidal], André [Gomes] and Denis [Suárez]. We’ll look for alternatives to try and play will 11 men. We’ll also keep Barcelona B in mind. We’re always keeping an eye on them.”

However, the Barça coach did not sound overly enthusiastic when asked if Dembélé’s absence could open the door for Arda Turan to return to the side. “The idea that some players are going to feature more because someone is injured is mistaken, it depends on what the players themselves do. It’s up to him to get back into the side by what he does in training and what the coach wants.”

Barça: Dembélé out for three to four months with ruptured tendon

Barcelona-Eibar, how and where to watch: times, TV, online