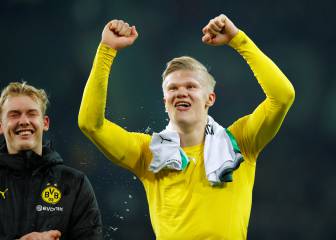 Haaland gives clues about what attracts him to a club

The Atletico Madrid president believes that the club will win plenty once Vitolo and Diego Costa are allowed to be registered and start playing with the club in January.

Enrique Cerezo spoke to GOL ahead of Chelsea's visit to the Wanda on Wednesday night to play Atletico Madrid in the Champions League. The LaLiga side just purchased Diego Costa from the reigning Premier League champions and they also signed Vitolo from Sevilla, who is currently on loan with Las Palmas. The president of the club says Atletico will have "the best squad in the history of the club" when their two newest recruits finally get to wear Atletico Madrid jerseys at the start of January when the rojiblancos' ban on reigstering players ends.

"We have a base from last season that is phenomenal and I believe that with these two players, we are going to win a lot come January, which is then they can play," said Cerezo. Atletico have handed over €100 million for the two players.

Regarding the game against Chelsea in the second round of games in the Champions League, the president said, "it will be a very tightly contested game, we will go out to win in a magnificent stadium."

Torres offered Morata advice ahead of his move to Chelsea

Simeone: "Conte is better than me"