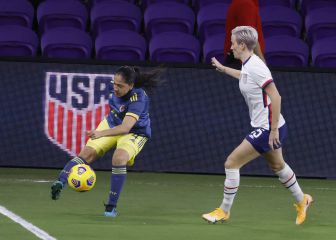 Rapinoe makes it three from the penalty spot

In spite of the comments made by Zidane in yesterday's press conference, the Welsh forward has been omitted from Madrid's 18-man squad list.

In the end Gareth Bale will sit out this evening's game against Espanyol. In yesterday's press conference Zinedine Zidane explained that a decision on the Welsh forward would be taken on the day of the game, and it transpires that the player won't be risked after picking up "a sprain" during last week's match against Borssuia Dortmund.

With Dani Carvajal joining Marcelo on the sidelines, Zidane has called Jesús Vallejo, who returned to training with the group on Saturday, and Achraf Hakimi, who looks set to start at right-back. The Real Madrid squad reads as follows:

Zidane: "Cristiano's contract is an issue for him and the club"

Bale has missed almost half of Madrid's games