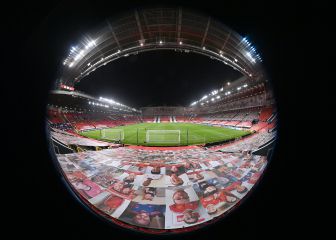 Zidane says Bale is set to go on international duty and he is happy with Isco's development but still believes there is more to come from his star midfielder.

Zidane spoke to Movistar Partidazo, Real Madrid TV and during his press conference after the Espanyol victory at the Santiago Bernabeu.

Fatigue: "The victory was important and the three points, above all else. We did well and later, in the second half, we got tired after playing a lot of games this is normal. What worries me is that my players are not going to get a break because they will go with their national teams now."

Never in full control: "It's difficult when you play a team that is very closed off like this, you have to have patience. We scored once in the first half but that is going to change. When we play teams that are more open, we have many more chances, for example away from home, when we scored three against Dortmund and another three against Real Sociedad. Today we can only think of the win, that's what is important."

Ronaldo: "He's not tired, he has missed a lot of games. He is very disappointed because he hasn't scored yet but this is football. That pass to Isco was phneomenal. I hope that in the next game it changes for him."

Achraf: "I am very happy with him, it is his first game here in the Bernabeu and he has done very well. Up, down, defending, serious, easy. I am happy with his debut because for him and his life, it is an important day. To mark his debut with a good game."

50 wins with Real Madrid: "I always try to win. Three wins in a row with the Champions League is what we want. We want to continue adding them up."

Isco: "He has more confidence. He knows now that he is important but he has always been. He plays the way he plays on the street. He has no worries and I like it. He continues on in this way and when things don't work out he has patence. I hope we can see an even better Isco."

Bale: "He is going with his national team. He could have been in the squad but seeing as he still has a problem, we decided to leave him out. Nothing happened to him but we would prefer that he didn't play. He had a lot of games in a row and he had an injury previously for four months. It's not an injury, it's a precaution that we took. I spoke with him about it and the doctors.""

Carvajal: "He is not going with Spain. We will see how it develops. It's nothing serious but we have to wait and see how it goes."

Complicated Liga: "I have spoken to it with my colleagues. This is going to be a very complicated league. I think there won't be just two or three teams that can win it. It's going to be more competitive. the other teams have reinforced very well and can compete."