Bartomeu: "Iniesta is a reference point for future generations" 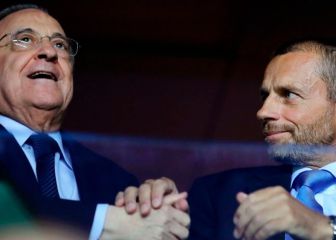 Bartomeu: "Iniesta is a reference point for future generations"

Barcelona president, Josep Maria Bartomeu, congratulated Andres Iniesta and presented him with a jersey after he agreed to a "contract for life".

Josep Maria Bartomeu delivered some good news to Barcelona fans on Friday. "Today it is a great day to be a culé and to be able to announce, for the first time in the history, a player has signed a contract for life, today we are all grateful for Andres Iniesta."

The club president explained Iniesta started "an era of winning in 2003 and until now has offered balance in the side, and while many players have changed, he always adds the balance. There is nobody in Barcelona, who was developed here and who continues at the very top after so many years at the same club. This is an agreement that has been earned and he will be a reference point for future generations and one of those that I will tell people not of his talent and how he plays but how he is as a person."

After a short speech to the media, the president presented Iniesta with a jersey with the number 8 on it that read, "A. Iniesta Forever" before the Barca and Spain legend signed the shirt.

Iniesta's contract situation: “There is no preliminary agreement"

Bartomeu: "It was a mistake to trust Neymar's father"