Zidane: "Would I coach Barça? My heart belongs to Real Madrid" 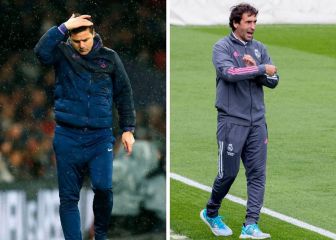 Pochettino and Raúl, weighing up the pros and cons

Zidane: "Would I coach Barça? My heart belongs to Real Madrid"

Real Madrid head coach Zinedine Zidane spoke to the media on Friday ahead of Los Blancos' LaLiga week 8 clash away to Getafe this weekend.

Gareth Bale: "He's doing well, he's better every day. He can't play [at Getafe]. He's had two things: the first in Dortmund, where he seemed to suffer from a slight muscle overload, and then his soleus flared up a bit. I can't say when [he'll return to action], but he's doing better and we'll take it day by day. We can't say whether he'll be back in a week or 10 days. He wants to get back out on the pitch as soon as he can."

Would you ever coach Barcelona? "My heart belongs to Real Madrid. As a player it was the same: I was asked if I wanted to play elsewhere after Real, and I said no."

Reaching 100 games as Real Madrid boss: "I was raring to go when I was appointed, and that hasn't changed. That's the vital ingredient: the desire we show in every game and in every training session."

Favourite moment so far: "The most special moment for me has been winning the LaLiga title. It's all been very special, but I'd choose that, because it's all about consistency, it's very tough, and it doesn't get much better than winning that."

Keylor Navas injury: "Hopefully Keylor will only be [out for] a few days: it's a strain in his adductor. We'll take it day by day. Luca [Zidane]'s issue is more serious, because it's his shoulder. Kiko [Casilla] will play [at Getafe] and Moha [Ramos] and [Javier] Belman will be in the squad."

Getting Karim Benzema, Marcelo and Theo Hernández back from injury: "We've got seven games coming up in a short period of time, and we're going to need everyone before the next international break."

Atlético Madrid vs Barcelona: "I'm focused on beating Getafe, and whatever happens [between Atlético and Barça], happens. I'm not after any result in particular; we're just concentrating on closing the gap."

What's your opinion on the argument that Real should have sold Bale and signed Kylian Mbappé this summer? "I don't think that's the case at all. We're only thinking about the players we have. We're not looking ahead or back, just focusing on the present."

Dani Carvajal: "You all know what Dani has and there's no messing around when it comes to heart issues. We have to be patient with the issue he's had. He's doing well, he's relaxed and has complete faith in those in charge of his recovery. We want him at 100%; it could be a week or two, but what's most important is his health."

Benzema: "He's important for us, I hope that tomorrow we can see him again."

Getafe vs Real Madrid: how and where to watch