Messi to Suarez: "You didn't deserve to be thrown out as they have done to you"

Diego Simeone's side could secure a crucial win in the Wanda Metropolitana, and now need to beat Roma and Chelsea while hoping other results go in their favour.

Atlético Madrid were left staring an embarrassing early Champions League exit in the face after being held 1-1 at home by 10-man Azerbaijani champions Qarabag on Tuesday.

The 2014 and 2016 finalists now need to beat Roma and Chelsea in their last two Group C games and hope other results go in their favour after a paltry return of three points from their opening four games.

Once again Diego Simeone's men were made to pay for their profligacy in front of goal after Michel headed the visitors into the lead five minutes before half-time.

Thomas Partey's stunning drive from outside the box levelled 11 minutes into the second period and Qarabag had to survive for half an hour a man down after Pedro Henrique saw red.

But Diego Godin, Filipe Luis and Nicolas Gaitan fluffed their lines with big chances to leave Atletico on the edge of the European abyss.

Atletico have now won just once in their last eight games as their debut season at the Wanda Metropolitano is descending into a disaster.

The hosts had started on the front foot as Antoine Griezmann's right-footed volley from the edge of the area forced Ibrahim Sehic into a smart save.

However, despite the vast disparity in budgets between the sides, it was the visitors who looked the more composed side in possession as the first half wore on, drawing whistles from the frustrated home crowd.

Henrique was first to threaten as he ghosted past the out of sorts Godin, but his cross was cut out by Stefan Savic with two teammates waiting to apply the finishing touch at the back post.

Atletico's major problem in recent months has been finding the net and their lack of cutting edge was demonstrated as Sehic raced from his goal to smother Kevin Gameiro's shot from a narrow angle and Godén powered a header over.

Simeone's side concede another header

Simeone was infuriated when Jakub Rzezniczak was only shown a yellow card for hauling down Gameiro on the edge of the box 10 minutes before half-time.

And the Argentine had even more to more to be concerned about five minutes later when Michel met Donald Guerrier's corner flush to send a header into the top corner despite Jan Oblak's best efforts.

Of the 10 goals Atlético have conceded this season, seven have now come from headers as a former strength of Simeone's teams has quickly become an alarming weakness.

Buoyed by a half-time dressing down from Simeone, Atlético again started the second period at a higher tempo and Gameiro somehow fired wide after Sehic had parried Angel Correa's initial effort straight back into the heart of the area.

Moments later Atlético could have found themselves 2-0 behind but for a brilliant goal line clearance from Savic.

That proved to be a turning point as Partey swept Griezmann's layoff into the top corner on 56 minutes.

Qarabag have man sent off

Qarabag were then reduced to 10 men just before the hour mark when Henrique was shown a straight red for a dangerous high challenge on Godin.

The Uruguayan defender's eventful 90 minutes continued as he then saw a powerful header cleared off the line.

Luis had the best chance to leave the 10 men without a reward when he stabbed wide when clean through.

The Brazilian full-back sent another long-range effort off target and Godin saw another late header saved by Sehic.

And Sehic saved Qarabag again in the dying seconds with a brilliant block from Gaitan, while Atletico were also reduced to 10 men when Savic was shown a second yellow.

Atlético missed the creative impact of the injured Koke and Yannick Carrasco as a third straight home draw leaves their European dreams hanging by a thread. 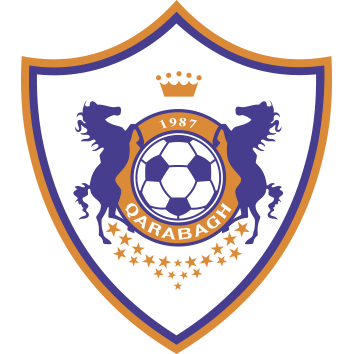