Zidane looks to spruce up side with youth 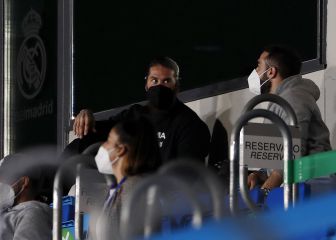 Zidane looks to spruce up side with youth

The Madrid coach is set to rotate against Las Palmas (Sunday, 20:45 CET), bringing Theo, Marcos Llorente, Asensio and Ceballos in to the starting eleven.

Following Real Madrid's heavy defeat to Tottenham in the Champions League on Wednesday, Zinedine Zidane is set to make wholesale changes to Madrid's starting eleven against Las Palmas (Sunday, 20:45 CET) in an attempt to inject some energy and pace into the side. Theo, Marcos Llorente, Ceballos and Asensio, on the bench at Wembley, are all set to start.

Therefore, at least four first-team regulars - Marcelo, Casemiro, Kroos and Modric - will be rested for Sunday's tie as Zidane looks to hand opportunities to a group of players who have all impressed when called upon. Theo, for instance, Madrid's most expensive signing in the summer (30 million euros), has only played 402 minutes so far this season. The former Atlético Madrid defender did pick up a shoulder injury that kept him out for four matches, yet despite that Zidane has not deployed him in key matches.

Dani Ceballo, meanwhile, is likely to be given the nod after limited game-time this season. The Spanish midfielder has participated in eight games - resulting in eight victories - but has only started in three. Marcos Llorente, in for Casemiro, has only been given his chance after the international breaks but has performed well in every game, particularly in breaking up play, recovering the ball every 9.27 minutes. Finally, Asensio will be given a starting berth and another chance to shine. After being lauded as one of the young promises of world football, the Spanish playmaker has had to make do with limited opportunities from the bench.

Marcelo responds to follower who criticised his 29 lost balls