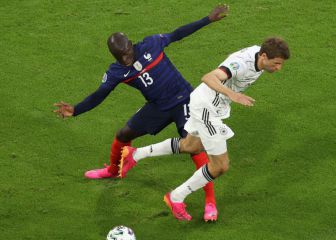 Keeper Itumeleng Khune is a doubt for South Africa's World Cup qualifiers against Senegal after suffering a fractured cheek bone.

Khune was rushed to hospital, where a scan revealed an "optical fracture".

He could be out for a period of between two and six weeks.

The injury leaves the 30-year-old in doubt for the World Cup qualifiers against Senegal on 10 November at the Peter Mokaba Stadium, Polokwane, and on 14 November at the Stade Leopold Sedar Senghor in Dakar.

Injury Update: Captain Itu has a fracture to a bone in his face. He will see a specialist regarding this and we will update you after pic.twitter.com/nFBD2ni2ZT

Despite the injury, hopes remain that Khune will still be able to join up with Bafana Bafana for the must-win qualifiers.

According to national-team doctor Thulani Ngwenya, Khune cannot be ruled out yet. "What we know is that he is going to see a specialist and then we will take it from there," said Ngwenya.

"You know that in medicine we deal with facts, and right now we cannot rule him out, nor can we declare him fit.

"We are hopeful that he can be with us in camp before Friday’s game. There is no crack on his facial injury, which is a good sign. But we will have all the information on Tuesday."

Firstly I’d like to thank God for protecting me through everything yesterday, secondly I’d like to thank all my fans ,Family ,friends and my teammates for all the love and support given to me...you can’t keep a good man down ! #GodIsGreat 🙏🏻 #TeamNoRest #Team16_32 #KCOneTeam #PassionDriven #KCNeverSleeps ✌🏻#RespectToYouAll😉

Supersport United keeper Ronwen Williams replaced Khune for the match in Praia, but gave a poor performance in a game that South Africa lost 2-1.

For the return game in Durban, Orlando Pirates' Wayne Sandilands occupied the position. However, he too failed to rise to the challenge, as South Africa were again beaten 2-1.

Khune's return to the line-up for last month’s qualifier against Burkina Faso saw Bafana Bafana bounce back to claim a 3-1 win at Soccer City.