The Lions of the Atlas are on their way to Russia 2018 as Herve Renard's side produced a highly disciplined performance in Abidjan against a lack-lustre Ivory Coast who lacked ideas, a clear game-plan and the hunger to combat their rivals.

Two early first half goals from Benatia and Dirar meaning that Marc Wilmot's side needed three goals with no reply on the night provoked the home side to look for a miracle.

A sad end to a generation which will potentially see an end to the international career of the likes of long servants Gervinho, Kalou and Toure and a performance that will almost certainly condemn Wilmot's future as Ivory Coast head coach.

Morocco stake a place at their first World Cup since participating in France 1998. and will be no  pushover with the likes of Real Madrid's Achraf, Fajr and Ziyech coupled with the guidance of shrewd journey-man coach Renard troubling many's a side at Russia 2018.

Ivory Coast vs Morocco: as it happened

90'+2'   The injured Mbark Boussoufa comes off for Morocco. A minute to go and a hat trick of straight WC finals is over for the Elephants.

Fajr set to come on for the Lions, the Getafe player set for at least a minutes action....Belhanda makes way

89'   Final minute in Abidjan. The dream is over for Ivory Coast as the camera pans to a reflective Gervinho.

88'   Great skills from Zaha as he earns his side a free-kick as the tackles get racier.

87'   Ivory Coast muster an attack and a tame header is safely caught by Munir in the Moroccan goal.

86'   Worth a mention Wilfred Zaha's industry too this evening, another bright player for the home side in a drab night for Ivoroian football.

84'   Kessie takes a corner and it reflects the evening for Ivory Coast as the Milan man plays the ball straight into the passage of the Moroccan defence.

Ziyech off and Amrabat on for Morocco

81'   No urgency from Ivory Coast as they limp out of the hunt for a WC 2018 place. Almost cetainly the end of an era for Kalou, Gervinho etc.

80'   Another Real Madrid player destined to be at Russia 2018 with a solid performance this evening from Achraf Hakimi who has just broken into Zidane's first team.

78'   Does a miracle exist in 12 minutes as the Moroccan fans chant sensing that they are on their way to Russia ! 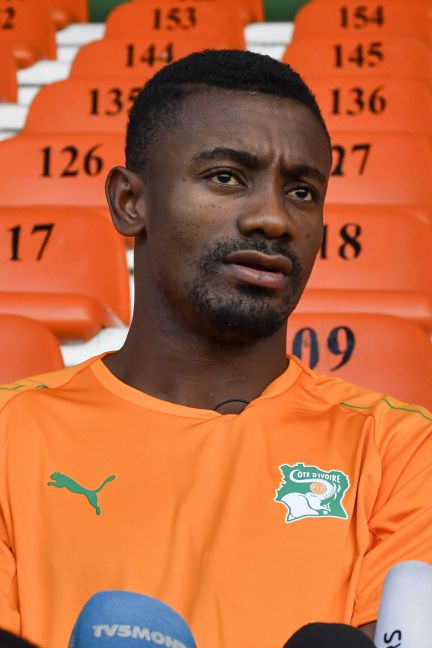 Kalou on for Ivory Coast with a last throw of the dice ...replacing Gervinho.

73'   Game getting tetchy as one or two reckless tackles flying in as a pitch invader takes to the field mid-match.

70'   Ivory Coast leaving plenty of space as they have to push looking for a goal, still sense a Moroccan third the better option rather than a goal for the home nation.

66'   Amrabat streaks away and the Leganes man is adjudged to have shoved Gradel in the battle for the ball. Wilmots looking forlorn on the home bench.

65'   Seven Nation Army rings out at the Abidjan stadium.... from the visiting fans I'd assume

63'   Morocco launch a counter as Aurier blazes over an excellent chance to claw the home side back into this game but a poor finish from the Spurs man.

Cornet comes on for IC as Fofana makes way

57'   Just over the hour mark here in Abidjan and Ivory Coast need three goals to get their Russian WC 2018 dream back on track.

55'   Serge Aurier has looked the brightest player for Ivory Coast tonight with the Spurs player one of the few sources of danger for the men in white.

53'   Ivorian players warming up with time approaching for Wilmots to shuffle his bench. What do they have against this disciplined and well-drilled Moroccan outfit?

48'   Worth pointing out at this stage too that Morocco have yet to conceed a goal in the WC2018 qualifying Group C !

47'   Early free-kick for Morocco as Ivory Coast bundle the ball away from making it three ! Terrible defending from the home side.

Morocco do the huddle and realise they are just 45' away from a return to WC football.

The teams make their way back to the pitch with long faces on the men in orange. Plenty of talent in this Ivory Coast but lacking a clear game-plan. 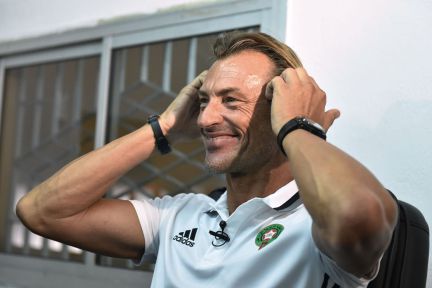 The Gambian match official calls time: HT Ivory Coast 0-2 Morocco ... join us for the second period and we'll find out which of the African nations is destined for Russia.

44'   Into the last minute of the half and somwehat of a surprise scoreline here in Adidjan. Morocco just 45 minutes from cementing their ticket to Russia, leading Ivory Coast 0-2.

42'   Neat play from Aurier who is eventually hounded out by the men in white. Morocco defending solidly with the confidence that a two goal cushion allows.

41'   The body language of the Ivory Coast is revealing. The players seem to lack that dogged determination needed to get themselves out of this hole.

37'   Gervinho hounded out by three men when on the ball, a reflection of the intensity Renard has installed in the Lions from the Atlas

Herve Renard in line to secure a salary increase if he secures a place at Russia 2018 with a new monthly wage of $83.000

35'   A goal before the interval would provide a life-line for the home side but from what we're seeing in Abidjan, a third for Morocco seems more on the cards.

34'   The atmosphere in the stadium has gone very, very flat with all the noise coming from the 500 or so red-clad Moroccan supporters.

Herve Renard still pushing his side forward, anxious to avoid the team sitting back despite the two goal advantage.

Benatia unmarked from a corner, tapping into the roof of the net

28'   What can Wilmots and his side come up with? The Ivorians now need two goals to get their World Cup dream back on track..just as Morocco almost score again.

26'   The Moroccans are one step closer to a place at Russia 2018, their first WC tournament since France 98

23'   What can Ivory Coast produce....Gradel No. 15 to take, straight in to the wall and then safely into Munir's arms..

20'   Excellet delivery from the Ivory Coast as a dangerous ball comes in from the right flank but Munir in the Morocco goal does well to smother the ball.

18'   Big call for a penalty from the home fans as the match official from the Gambia waves away protests from Aurier. Correct call !

16'   Gervinho through, but the former Roma and Arsenal man drives his shot over after initial great control. Poor finish from the 30-year-old.

14' Ball deflected for a corner, not a great delivery from the the Moroccan side. Game getting tetchy now with foul upon foul.

13'   Morocco awarded a very dangerous free on the edge of the area. Trouble for the home side as Boussoufa is tripped by Deli.

12'   Very evenly poised game at present, little in theway of free-flowing football from the sides with tension certainly present with the prize being so vast

10'   First corner of the night for Morocco.... 500 fans here in the Ivorian capital to cheer on the visiting side.

Kessie booked for a foul, Gambian official stamping his mark on the game early on

9'   Danger as Gervinho weaves into the box and the interception falls to Doumbia who blasts over... more pressure now from the side in orange.

8'   LaLiga eyes of course on Real Madrid's Achraf Hakimi as the home side win two back to back corners.

6'   Amrabat gets on a loose ball and hammers over the Ivory Coast bar. Brighter start for the men in white so far in Abidjan.

Don't forget ...win for Ivory Coast and they're off to Russia, a draw or win for the Lions from the Atlas and it's Herve Renard's side who will be off to WC 2018. 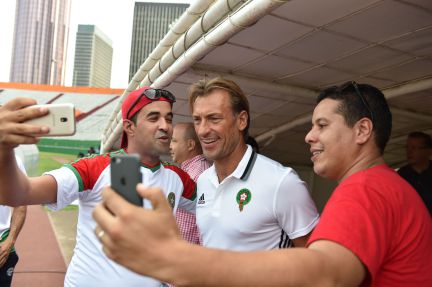 Moroccan coach Herve Renard has been busy this week plotting the downfall of the Ivory Coast, who he guided to the 2015 Africa Cup of Nations title.

Morocco are seeking a first World Cup appearance since 1998 while the Ivory Coast qualified for the last three tournaments in Germany, South Africa and Brazil.

"I believe the most solid and best organised team will go to Russia," said Renard, "and I hope that team is Morocco."

Belgian Marc Wilmots has struggled since being hired last year to coach the Ivorians, with a shock home loss to Gabon a major World Cup setback.

Confidence is somewhat muted among Ivory Coast fans with consternation about the negative tactics employed by the new Belgian coach with September's shock home defeat to Gabon plunging the Elephants into the qualifying dilemma they find themselves going into the final match.

Selection problems also pose another headache for Wilmots without without the influential trio of Eric Bailly (suspended), Jean Seri and Wilfried Bony (both injured) although the Belgian will be able to call on Max Gradel and Zaha.

The latter, in particular, could prove to be a key figure - particularly considering that both Gervinho and Jonathan Kodjia are only finding their way back to fitness.

Wilmots refused to see the match as a personal showdown between him and Renard: "I have never seen a coach score a goal," he told reporters.

Anything but defeat to The Elephants will do and see Morocco seal their ticket for Russia 2018 and there is no doubt that Herve Renard would be happy with the result of the first Group C game when both sides tied 0-0 in a tense affair at a packed Stade de Marrakesh exactly a year ago..

Speaking to the Guardian earlier this week former Moroccan international and Premier League star Mustapha Hadji talked about the national team being on the cusp of World Cup qualification for almost 20 years claiming: “After Islam, football is our second religion,” he says. “Morocco loves the game and is a real football country. It would be the first time we have qualified since the king came to the throne so we will try to do it for him as well. It would be the biggest gift we can give if we make it. The Moroccan people have been waiting for this for a long time – rich people, poor people, the guy on top of a mountain with his sheep.”

Renard and the Morocco squad arrived on a Rabat-Abijan flight to be greeted by 500 fans with another 4.000 expected to cheer the Atlas Lions on at the Felix Houphelet Boiugny stadium.

An interesting, and handsome price is the 50/1 currently on offer for the home side leading at the interval with a comeback from the Lions of the Atlas to secure the win at the full-time whistle.

Bet on Ivory Coast vs Morocco