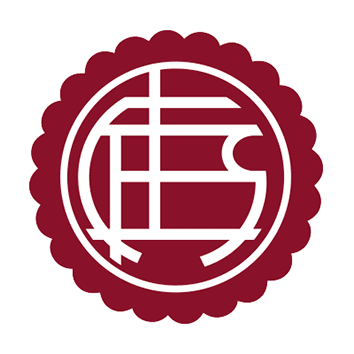 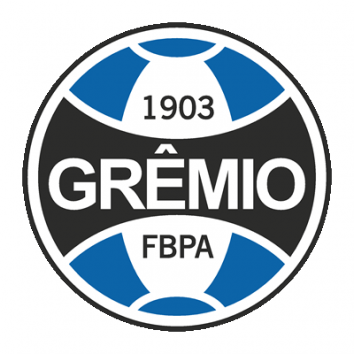 Two first half goals from Fernandinho and Luan were enough to put the Brazilian side in the driving side despite a second half penalty offering a glimmer of hope for Lanus.

In the end quality shone through and Gremio are the just 2017 Copa Libertadores champions having outplayed the Argentine side over the 180 minutes.

The 1-0 first leg advantage was enough to give the Porto Alegre side the confidence to take the game to Lanus who seemed overawed by the magnitude of the occasion.

Two first half goals from Fernadinho and Luan meant Lanus needed three to take the contest to extra time and despite the briefest glimmers of hope as Sand slammed home a 72nd minute penalty and Gremio were reduced to ten men in the final fray of the game, the "Tricolor" had too much for the Argentinian outfit.

90'+4'   So, it's Gremio that we'll be seeing at the forthcoming FIFA Club World Cup. Tears in the stands from the home fans but the Brazilian side have been the better team over both legs.

89'   Gremio fans pick up the tempo once again.... 1 minute plus time added on away from a Libertadores win.... just as Luan dips the ball inches wide ...

86'   Marcelo on the ground looking to waste precious time. Still looks unlikely that a miracle will happen for the home side.

Ramiro Benetti off ! Two back-to-back yellow cards for the Gremio player. The Brazilian side down to 10 men!

77'   One senses that Lanus just don't have the quality to get the required goals. Rojas on for Silva (Lanus)

Change for Gremio: Cicero on with Barrios making way

73'   Lanus fans find their voice as time ticks down ... Can the Argentine sid find 2 more goals ?

70'   Penalty for Lanus, Jailson booked after a trip on Acosta

69'   It's party time in the away end as the Gremio fans sense they are close to seeing their side secure their third Libertadores. 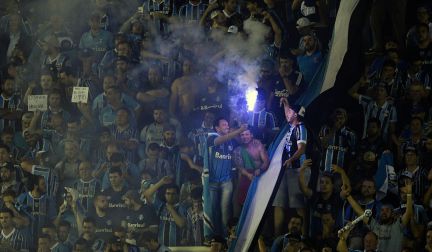 64'   Marcelo has really yet to be put to the test by the Lanus strikers this evening as Gremio pass the ball around with confidence as Barrios almost makes it 3 heading over from close range. 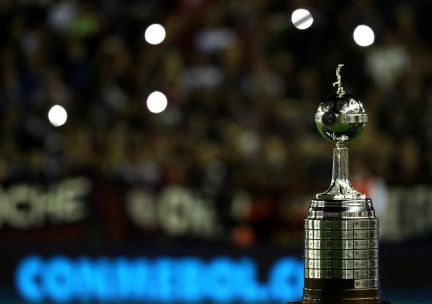 60'   The hour mark arrives and still nothing from Lanus to claw themselves back into the game. Gremio happy to upset the rhythm of the match.

57'   Lanus fans find their voice as the home side win a dangerous freekick... it's not great and Gremio break

54'   Highly likely too that we'll be seeing Gremio again soon at the FIFA Club World Cup in the UAE in December. fingers crossed Arthur's injury isn't that serious...

46'   Lanus really need an early goal to claw back into this tie and we all remember what happened in the semi final of the second leg against River Plate....

46' The teams take to the "La Fortaleza" pitch in Lanus in the outskirts of Buenos Aires. 45' to go as the home side kick off

That's it as Mr. Caceres calls time on the half with Gremio just 45' away from their 3rd Libertadores title.

45'   Gremio turning on the style here as Luan feeds Barrios who fires wide.

39'   Martinez drives a half-volley off target as Lanus look for a goal that would bring them back into the contest. Gremio still looking confident as they have from the first minute as Luan drives a right footer high and over the Lanus bar.

35'   Lanus just lacking that touch of composure when close to the Gremio area. The goal has really woken the game up with urgency about everything Lanus do now.

32'   A hell of a racket coming from the corner where the Gremio fans are housed .... Uphill for Lanus with the Brazilian side in total control.

30'   Great freekick from Maxi who almost gets Lanus back into the game as Grohe saves well. Gremio strike again on the counter with the goal opeing the game up incredibly.

Terrible mix-up at the back from Lanus and Fernandinho availed, sprinting clear of the defenders and lashes home.

Another card, this time for Edilson (Gremio)...I predict this game will not finish with 22 men on the pitch !

24'   Good from Gremio again as they work the ball around well in the opposition half but the ball fails to break for a striker and Lanus clear their lines. Gremio looking cool, calm and composed ... Lanus lacking ideas and composure.

21' Arthur kicked on the ground by Velazquez and earns a card of the yellow variety for his trouble. Two Lanus men on yellows....

17'   Gremio looking the stronger as we head towards the 20' minute mark. Grohe in the Gremio goal has been a virtual spectator all evening.

14'   Great play from Gremio with Lucas Barrios firing wide from just outside the Lanus area, the Paraguayan internationsl should have done better. 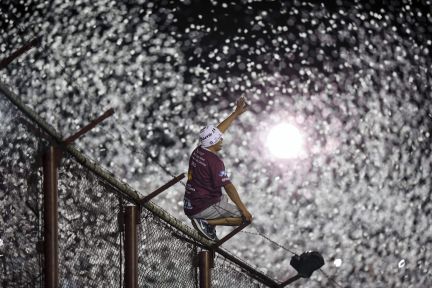 12'   Lanus now managing some better spells in possession after a lightning start from the "Tricolor".

7'   All Gremio in the opening stage of the second leg. Lanus yet to get into the rhythm of the match as Fernandinho rifles a shot on target that the Lanus keeper smothers well. Excellent passage of play from the Brazilian outfit.

6'   Dangerous freekick for the visitors ...Jailson strikes the ball straight at the Lanus wall.

5' The card is out already after Garcia (Lanus) takes a rugged hack at Gremio's Luan.

3'   Danger as Gremio break but the linesman's flag was up. More intent from the Brazilian side in the first three minutes than was displayed in the first 45' last week.

2' Robust tackles flying in with three players lying on the pitch. Gremio's Jailson seems to be in trouble ...

No away goals rule in the final is a key factor to remember.... and Gremio hold a 1-0 lead from the first leg last week.

A minute's silence (applause) held in memory of the Chapecoense tragedy....

Ref. says to the players "Enjoy the game guys, we're here to play"... last minute prayers and ko seconds away ....

Gremio in their classic blue, white and black striped shirts, white shorts and socks. Lanus in their burgundy shirts with matching shorts/socks.

The teams take to the pitch at a packed "La Fortaleza" ... Lanus aiming for their first ever Libertadores and Gremio hoping for a hat-trick of titles.

Iconic image of kids climbing the chicken wire at an Argentine ground .... check 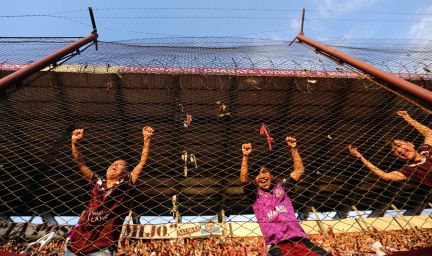 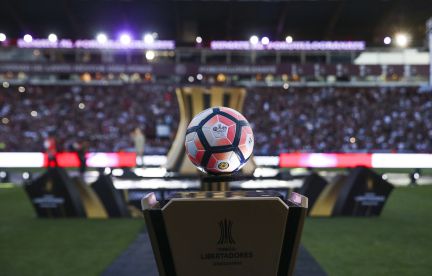 Gremio arrived at this stage of the competition after overcoming (the Ecuadorian) Barcelona in the semi-final, while Lanús qualified for the final thanks to a 3-4 aggregate victory over Buenos Aires neighbours River Plate.

Lanús arrive after a fair few logistical issues.
Every Libyan and their dog are supporting El Granate!

"The key to the game plan of Lanus is the positioning of their pair of wingers, Alejandro Silva and Lautaro Acosta," says Tim Vickery, the doyen of South American football, on ESPN. The quality of their deliveries in to big José Sand will also be a determining factor.

Not ideal preparation for Lanús. The home side's team bus broke down, so they were forced to travel to the stadium in whichever vehicles they could get their hands on.

FIFA.com have 37-year-old, Jose Sand, as the man to watch tonight. They say: "At the age of 37, El Pepe is a man rejuvenated. A Granate icon, he has won two titles with the club, but was playing in the second division as recently as three years ago. A return to Lanus revived his career, to the extent that he is one of the leading scorers in this year’s Libertadores with eight goals. Some of those goals were important ones as well: a late strike to knock out The Strongest in the last 16, an early one to trigger a comeback against San Lorenzo in the quarter-finals, and the first two in the dramatic and historic 4-2 defeat of River Plate in the second leg of the semi-finals."

Hello and welcome to our live coverage of Lanús v Gremio in the final of the 2017 Copa Libertadores (second leg) The Brazilian side take a slender 1-0 advantage into the game which gets underway at 00:45 (CET) from the Estadio Ciudad de Lanús – Néstor Díaz Pérez.

Can Lanús turn around the 1-0 advantage secured by the Brazilian outfit at the Arena do Gremio last week as the 2017 Copa Libertadores reaches it's conclusion on the Buenos Aires outskirts tonight?

The men in burgundy are aiming to lift the first Libertadores trophy in their history after surprising the continent by reaching the final with an incredible comeback against traditional Argentine powerhouse River Plate.

Gremio in turn are looking to secure their third Libertadores crown after wins in 1983, and 1995 and take a 82nd minute Cicero goal into the second leg in what's set to be a hostile atmosphere with 40.000 home fans packing into the Estadio Ciudad de Lanús – Néstor Díaz Pérezpero.

A packed "Fortaleza" some 10 km to the south of Argentine capital becomes the focal point of world football this evening with a place in the forthcoming FIFA Club World Club Cup at stake.

"It's a final and finals are to be won. It was an arduous journey to get to this point and the team are in good shape and we're faced with a first leg scoreline that is easy to overturn", stated Lanus boss Jorge Almirón.

Almirón claims to have chosen his starting XI with just one doubt in his defensive libe-up and has to make do without the suspended Diego Braghieri.

"It's just one goal and we need to be patient. The ground will be packed and the atmosphere will be excellent. The team will rise to the occasion", affirmed the head coach".

The Brazilian outfit stand on the cusp of their first Libertadores for more than 20 years with Gremio with the 'Tricolor' raining at the "Fortalez" last night and coach Renato Gaúcho anxious not to reveal any clues about his starting line-up.

Unlike Lanus who had their domestic game postponed this week-end, Gremio played at the weekend in the penultimate match of the 2017 Serie A campaign securing a 1-1 draw against Atlético-Go.

"We're ready for the game and dream of lifting the cup. We're confident that our collective work will be enough to avail", stated striker Ramiro speaking to local media before making for the Argentine capital.

Everything points to the same XI that lined upo in Porto alegre taking to the pitch with the exception of defender Walter Kannemann who had his card appeal turned down by Conmebol para que le quiten la tarjeta amarilla recibida en el partido de ida en Porto alegre.

Match official in Lanus tonight is Paraguayan referee Enrque Cáceres who will be assisted by Eduardo Cardozo and Juan Zorrilla.

Fancy the Argentine side lifting the 2017 Copa Libertadores trophy, but after penalty kicks? A shoot out and win for the men in "granate" pays out at 12/1. 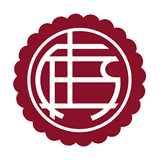