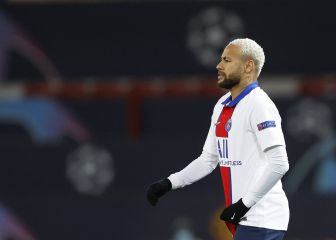 The France international fell out with Eduardo Berizzo after the Champions League draw with Liverpool, and stated that "my future is away from Sevilla".

Steven N'Zonzi has broken the silence around his absence from Sevilla's last four matches.

"Clearly, my future is away from Sevilla," the 28-year-old told France Football, "the only thing that disappoints me is the way it ended".

N'Zonzi fell out with the coaching staff at the Ramón Sánchez Pizjuán after leaving the stadium at half time in the match with Liverpool in the Champions League. N'Zonzi was substituted at the break, with Sevilla losing 0-3 at the time. Eduardo Berizzo's team recovered in the second half to draw 3-3.

"I'm not bitter towards him [Berizzo]," the France international added, "I'm not here to argue with him, but his words affected me. From that point, out relationship broke down."

"I'm not going to repeat what he said to me. But after, in public, he said that he would only count on players who shared his footballing vision. What does he mean by that? A player must always adapt themself to what the coach asks of them, and I've always done that. I think my situation is unfair."

N'Zonzi suggested that Vitolo's departure to Atlético Madrid (via a loan spell at Las Palmas), harmed his chances of leaving Sevilla in the summer.

"I had the impression in the summer that the club wasn't making an effort to explain things to me, to engage in dialogue, when I had various offers. Vitolo went to Atlético without the agreement of the leadership, and it was as if they shut the doors after him to prevent anyone else leaving."

The former Stoke City player denied that he has been in London to negotiate with Everton or Arsenal, insisting that it was a personal visit to see his son.

Yet he admitted that he could leave Andalucía in the next summer transfer window: "Sevilla could be interested in selling me. There's always a business element to football. But what irritates me is the way in which this is happening. I've never had a problem of this kind with a manager."