Zidane: "Benzema hurt himself after the Clásico, I believe him" 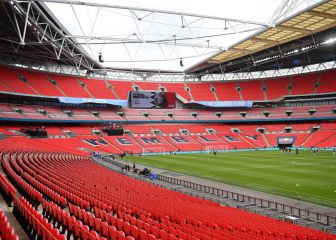 Zidane: "Benzema hurt himself after the Clásico, I believe him"

Zidane spoke to the media about reinforcements in January and the mysterious situation that is Karim Benzema's injury after the Clásico.

Zinedine Zidane spoke to the press ahead of Real Madrid's return to action in the Copa del Rey on Thursday against Numancia.

New Year: "We are very excited, that is the most important thing. We are in three competitions and we have the same excitement and we will do everything to give the maximum in every game. We return to the Copa and hope to continue into the next round."

Kepa: "I don't like talking about players that are no mine. He is not a Real Madrid player and I only think about my players and my goalkeepers. It's the only thing I can count on."

Benzema's injury: "After the Clásico, he felt something. It was said that it was before the Clásico. I have faith in my player and he has hurt himself. Like always, for me it is terrible that a player is injured. The thing of Karim happened after the game; it's a lie that he was injured before. He went on holiday like everyone and did what he had to do and he returned and he's still not okay. After the Clásico, he felt something, without know exactly what. He was injured when he went on holidays and we didn't give it much importance at the moment because we thought that it was a small thing but during the vacations we realised it was more important when we saw the result of the scan."

Meeting with Florentino and Jose Ángel Sánchez about signing a striker: "I won't reveal the conversation. We spoke about everything and also about reinforcements. Today, there will be no signings. Later, until the 31st, anything can happen. What I don't want is for any player to leave the squad. A manager build his squad from the start of the season. I will fight with them until the end."

Arrival of players: "I have faith in my squad. It's true that the loss in El Clásico hurt, but we will never back down. We are still alive in three competitions. People can give their opinion, as always, but we have the same excitement. We will fight in every competition. Later, at the end of the season, we will see if there are things we have to change."

Wishes. "Health for everyone. Nothing more. No goalkeeper, no striker...nothing. I am happy with my squad and I will fight with them until the end."

Continuing in Madrid for many years: "The annoying thing about here is that you never know. I aim to finish the season in the best possible way and we have many chances to win once again."