African Player of the Year Awards

Mohamed Salah, Sadio Mané and Pierre-Emerick Aubameyang were all nominated but the Egyptian scooped the top prize for best African Player of the Year.

Liverpool star Mohamed Salah won the African Player of the Year award Thursday, the first Egyptian to achieve the feat since 1983. Fellow Liverpool attacker Sadio Mane of Senegal was runner-up and 2015 winner Pierre-Emerick Aubameyang of Borussia Dortmund and Gabon third.

This award is especially for me and my country and for all of the kids in Africa.

There we go. Mo Salah wins the Player of the Year award.

She explains when she moved from Arsenal to China people told her that her career was over! But she wins the Woman's Player of th Year and used the stage as a chance to tell all the young people to now let anyone talk you down! Very emotional. Very nice.

Asisat Oshoala wins Women's Player of the Year and she is very emotional on stage. Gets a massive round of applause from the crowd.

Hector Cooper wins the manager of the year.

Wydad win the club of the year!

And the winners are South Africa..

Nominations for women's team of the year!

Oh, and some Didier Drogba too.

Lots of love for Carol Tshabalala.

That seems to be it for the dancing.

Still dancing. Onto their third song.

We have about 20 kids dancing on the stage now to some funky pop music.

Drogba joins them along with Adebayor and Yaya Toure with decent applauses too.

Weah and Kany two with the most claps so far.

A round of applause now as the former winners are shown on the screen.

It's the sponsors CEO, Benedict Peters, speaking now and he wants to finish by thanking God at the end of his speech.

This person obviously not a fan of the politician's speeches before the awards!
Drogba.

Football is a force for good says Ghana's head of state.

And Madam Carol and Didier Drogba up on stage now.

And now thanking the sponsor. Big round of applause as we approach the defining moment of the night!

He's naming out the previous winners with some excellent footballers in the list. Drogba, Yaya Toure among those mentioned.

"I am a lover of football, so I know a good footballer when I see one," says the man making the speech. He says his brother is a Liverpool fan so is delighted that Mane and Salah are among the nominees.

And the speeches continue...

Ahmad Ahmad has embarked on a rather lengthy ramble of thank yous and congratulations.

CAF president Ahmad Ahmad, from Madagascar, takes to the stage. He is speaking to the room in English and French.

We're being shown seemingly endless highlight reels. And then... 'THIS IS THE BEGINNING' says a voice from the stage. Yay!

This is the stage, and it's set.

HERE WE GO! An anthem is being sung by Efya and the ceremony will get going after she's done.

They're running mysteriously late in Accra.
While we wait, why not re-live Mo Salah's penalty that sent Egypt to the World Cup.

The players are arriving at the venue in Accra. Salah in a blue suit, Mané in a tuxedo and bow tie. No sign of Aubameyang yet, but he's no doubt dressed loudly.

This is interesting, and a rather sad indication of how African club football is viewed by its own association.
Michael Essien never won the Player of the Year award, although he did come second to Freddie Kanouté in 2007. The Ghana star has been honoured with a rather dubious statue in his home country...
All very cordial between the two Liverpool team-mates earlier on today.

Liverpool duo Mo Salah and Sadio Mané will not be able to celebrate or commiserate in Ghana this evening. Liverpool face Everton in the FA Cup tomorrow, and the pair will fly back to Merseyside overnight. Salah has a knock and will not be available, but Mané could be in contention.

It looks like Mo Salah's flying start to the Premier League season has made him big headed. B'dum tish.

George Weah won this award back in 1995. Last week he was elected as the president of Liberia. Whatever next for the former Monaco and PSG man?

Sergio Gómez starts for Celta. He was out before the Barcelona game and returned for the trip to the Camp Nou in LaLiga. After four minutes Luis Suárez pushed him and he hurt his shoulder! He'll be glad there's no Luis Suárez tonight!

Bakambu listed in the African Player of the Year nominations. Would be a massive week for him if he did sneak a win as he just sealed a move to China from Villarreal. 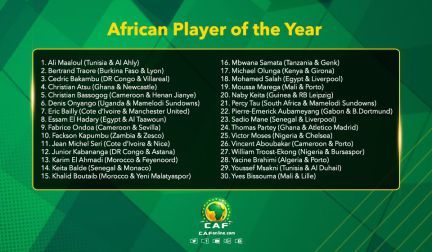 A nice message from Pele for the man many believe will be the next winner!

Former African Player of the Year winners. Biased over here but Frederic Kanoute one of the top names on that list! 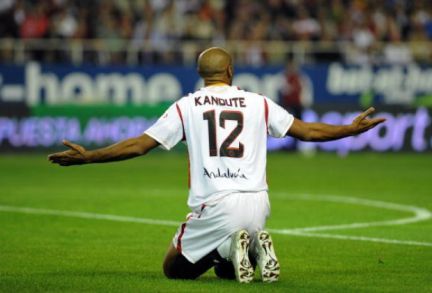 Meanwhile, the candidates for the coach of the year are: Hussein Amoutta (Wydad Casablanca), Héctor Cúper (Egypt), Gernot Rohr (Nigeria). We suspect that one will be a a stright shoot-out between Amoutta, who led Casablanca to the CAF Champions League title, and Cúper, who led Egypt to the World Cup. 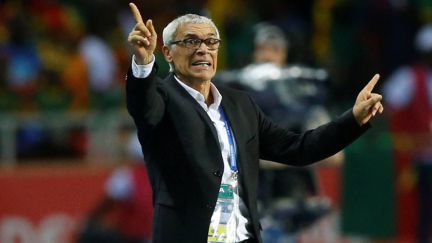 There are plenty of other prizes on offer this evening. The three contenders for the Women's Player of the Year Award are as follows: Chrestina Kgatlana (South Africa, UWC Ladies), Gabrielle Aboudi Onguene (Cameroon, CSKA Moscow), Asisat Oshoala (Nigeria, Dalian Quanjian).

Liverpool's Mo Salah is the overwhelming favourite to lift the prize this evening after a stunning year in which he has taken the Premier League by storm and helped Egypt to a first World Cup finals since 1990. Salah has already added the 2017 BBC African Player of the Year and Arab Player of the Year awards to his personal trophy cabinet. 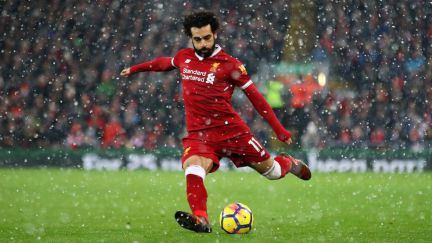 Hello and welcome to our live coverage of the African Player of the Year Award 2017 ceremony from Accra.

Liverpool will be well-represented on Thursday as the successor to 2016 winner Riyad Mahrez is announced in Accra. Both Mo Salah and Sadio Mané of the Anfield side are on the three-player shortlist for the men’s award along with Borussia Dortmund striker Pierre-Emerick Aubameyang.

Salah, who has carried his exceptional Roma for over into his second debt season in the Premier League, is the overwhelming favourite to lift the award after scooping both the BBC Player of the Year and Arab Player of the Year prizes after also helping Egypt to the World Cup finals for the first time in 28 years with five goals in qualifying. Mané was also in fine form for Liverpool in the second half of last season until he was sidelined by a serious injury and has found himself somewhat overshadowed by his new teammate in 2017-18 while Aubameyang, the 2015 African Player of the Year, has struggled for form in a stuttering Dortmund side and elected not to play for Gabon in several of their World Cup qualifiers.