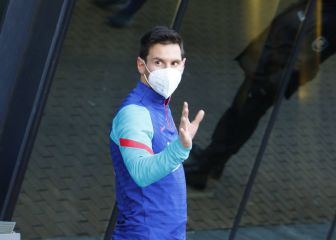 The wait for Diego Costa’s second debut lasted an eternity. He returned from holiday in Lagarto, Brazil, on 21 September, when his transfer from Chelsea to Atlético Madrid was announced. But he could not play for more than three months due to the FIFA transfer ban. An overweight Costa landed in Madrid on 22 September and made a confession in the airport: “I’m not scared of the scales, I’m scared of El Profe”.

What did Óscar 'El Profe' Ortega – fitness coach at Atlético – have in mind to polish Costa in to shape? How could he get Costa to lose 10 kilos while maintaining his sanity? The work was non-negotiable, but El Profe found the perfect plan for Costa: boxing.

Diario AS visited Nine Fitness, the gym where Costa took his first steps as a boxer under the tutelage of El Profe and boxing coach Jesús García.

“Costa’s pre-season was peculiar and El Profe was looking for a way for Costa to enjoy himself while losing weight at the same time. He knows the benefits of boxing, and adapted it for him,” explained Óscar Meléndez, the director of the gym, which is part-owned by Fernando Torres.

"He was bitten by the bug, in the gym he was jokingly challenging the other clients"

Costa completed six 90-minute sessions at the gym, and added to that with boxing routines at home on his own.

“He was bitten by the bug,” said Meléndez, “in the gym he was jokingly challenging the other clients.”

“Boxing is really good as a complementary fitness regime. For footballers like Torres and Costa, big and strong, it helps with coordination, reflexes, and stability… something as specific as controlling the ball, turning, and accelerating can be improved with boxing,” Meléndez added.

"Diego wasn't scared to try things or get hurt"

So off Costa went to the gym with his backpack, El Profe, and Jesús, his boxing coach. And he got straight down to hard work.

“Diego is a brave lad,” says Meléndez when asked about Costa’s first few visits, “he wasn’t scared to try things or get hurt. He came in saying hello to everyone. It was said that he came in overweight and yes, he did have to lose a bit, but physically he’s an incredible specimen. And he was up for it. It’s just as competitive in the boxing ring as in football. He wanted to learn as quickly as possible, and he really took it to heart. He was hooked.”

But Costa had to show further patience in the boxing gym. It wasn’t a case of arriving and putting the gloves on straight away. Everything was calculated.

“He went through the whole process,” Meléndez continued, “but he picked it up quickly. First of all we taught him to move his feet and his body, we did exercises with balls, and then the game of touching the opponent’s shoulder… and after that we gave him gloves to defend himself and throw punches, which was what he enjoyed most.”

The benefits of boxing go beyond physicality. Costa is a temperamental footballer and this learning process could help him to control his temperament on the pitch: “Boxing is competitive, including when you’re working on the bag. But it teaches you that you can’t always go forward, you have to move back, relax, and know how and when to act. It’s going to help Diego Costa and it’s going to make him a better forward,” said Meléndez.

El Profe Ortega has the absolute confidence of Diego Simeone. But with Costa, El Profe faced a different challenge. The Spain international still had to take part in Atlético’s regular training sessions at the club’s Cerro del Espino base, but El Profe added boxing for variation.

"Few people thought that boxing and football could compliment each other"

“He [El Profe] lives for physical activity and it’s been a privilege to listen to him. He’s very demanding and he has created a new form of training for footballers. Few people thought that two such different sports could complement each other,” said Meléndez.

The Atlético fitness coach knew Costa would get hooked on boxing and that's exactly how it turned out. The striker, who couldn't hide his displeasure when Simeone didn't let him play in training matches, was delighted to get away from just working out and loved being in the boxing gym. "But El Profe had it all worked out, he had a clear objective and stayed right on top of Diego: 'do this', 'get down', 'spread your legs'... He told our coach Jesús exactly what he wanted to achieve with Costa and what work to do, building up progressively." A good example is that he didn't do skipping, which is a standard boxing exercise, to avoid putting pressure on his knees.

And with Costa loving the ring, other players in the Atlético Madrid dressing room have become curious about the sport. Torres, who owns Nine Fitness, has also decided to try on the gloves.

"He's tried kick-boxing and boxing," said Meléndez, "he's an incredible physical specimen and he's used them as complementary routines. A footballer's routine needs variety and Fernando loves boxing. From the outside boxing can appear like an aggressive sport, but it's really entertaining and fun." And interestingly, after his boxing training, Costa scored on his debut, as did Torres: "We were delighted both scored. Chance? Or because they were both training here...?"